The Greatest Kansas City Chiefs, By the Numbers: #30

Share All sharing options for: The Greatest Kansas City Chiefs, By the Numbers: #30 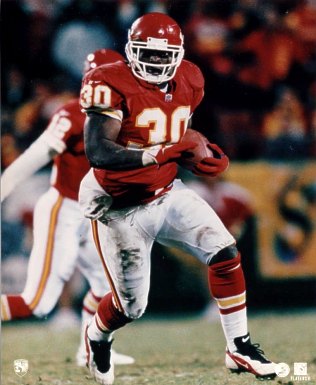 The list of the players to wear #30 for the Kansas City Chiefs may have the distinction of having the craziest first names of all of the numbers we've done so far.

Cleophus? Gloster? Lyle? Oh yes. They're all in there. Current #30 Ricardo Colclough fits this trend too.

And don't forget about Donnell Bennett, who has to hold some kind of double letter record for a person's name.

More about the Chiefs wearing #30, after the jump...

Bayless was a long time Charger and Buffalo Bill before spending two separate parts of his NFL career in Kansas City. He started 26 games from 1992 to 1993 in KC, snagging three INTs as a safety. In 1994, he was signed by the Washington Redskins as an unrestricted free agent, where he only played one season.

Bayless returned to Kansas City from 1995 to 1996 and played nickel for the Chiefs. He only started one game in his final two seasons but played in 28 games. That's about right for a rotational player.

Man, how many of 1990s Chiefs fan are just so familiar with the name Donnell Bennett? I know I am. He definitely came along at the right time, during the second coming of the glory years.

The Chiefs loved drafting running backs in the mid 1990s. Despite having traded for RB Marcus Allen in 1993, the Chiefs went running back in the first two rounds of the '94 draft - Greg Hill in the first round and Bennett in the second round.

Bennett played almost his entire NFL career in KC, playing fullback for the Redskins in his final season. He played in 86 games for the Chiefs, starting 15 of them. He had 519 rushing attemps; 1,941 yards rushing; and 17 touchdowns.

Bledsoe was an undrafted running back out of San Diego St. when he came to the Chiefs. In 1981, Bledsoe started one game for the Chiefs and played in thirteen of them. He had twenty rushing attempts for a total of 65 yards in 1981. A significant injury in the '81 season hampered Bledsoe through the '82 season, where he only played in three games.

He left the Chiefs after the 1982 season and spent some time in the USFL. He's also a heck of racquetball player too, apparently.

After three seasons of limited action in Green Bay, Carruth came to KC for two games and registered very few stats. He retired after the '89 season.

Cleo Miller Jr. was an undrafted free agent out of Arkansas Pine-Bluff who the Chiefs took a flyer on in the '74 season. He contributed a couple hundred yards rushing and just over a dozen kick off returns before being traded to Cleveland mid way through the 1975 season.

A 7th round pick by the Chiefs in the 1965 AFL draft, Richardson played four seasons in KC, amassing over 60 receptions and a dozen TDs.

Richardson played collegiality at Jackson St. Which other Chief went to Jackson St.?

Robinson was a 4th round pick in the '84 draft and he would go on the play four seasons in Kansas City. He started a handful of games and played in nearly 50 of them while a Chief. He had three INTs with the Chiefs and twelve INTs in his final three NFL seasons in Tampa Bay.

Spikes was a FB/RB/K during his time as a Texan and a Chief. In five seasons as a Chief, Spikes had 329 carries and 1,392 yards rushing. He also had twelve TDs.

As a kicker, the guy was just freakin' terrible. He was 19 of 57 in KC kicking field goals. Naturally, Spikes' field goal attempts dropped off dramatically in his career.

Not a whole lot to say about West. He was a minor special teams/safety for the Giants and Chiefs in four seasons on the NFL. He registered six tackles for the Chiefs.

So who's it going to be this morning Arrowhead Pride readers? Make sure you vote and let us know your thoughts in the comment section.