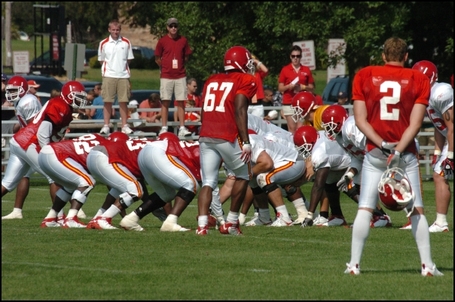 I don't know why but there are quite a few folks out there (myself included) that are interested in jersey numbers.

Back when Matt Cassel was signed, there were quite a few of us wondering why it took him over a month to choose a jersey number. On March 30th, an Arrowhead Pride reader found a mini-helmet signed by Matt Cassel being auctioned off. Under the signature was "#7". We posted that information on the site and it's probably no coincidence the next day he was assigned jersey #7.

That said, we've learned, courtesy of Josh Looney at the Mothership, new Chiefs quarterback Matt Gutierrez is wearing #15 in practice.

Practice No. 9 is underway in River Falls as we speak. Stick around as we'll have updates within minutes of the conclusion of practice (Thanks to Twitter and Mr. Looney).

For now, participate in the poll below.