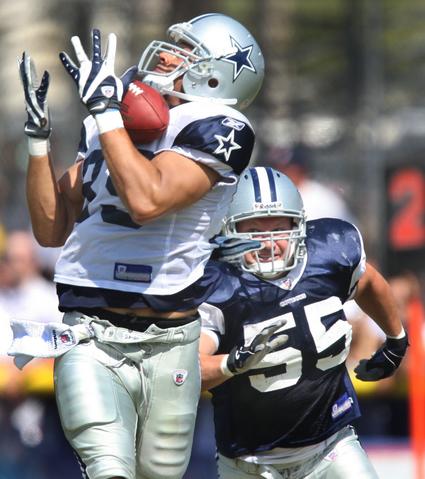 The team also announced that TE Tony Curtis has been released.  He was a 6'5", 251 pound four year veteran with six career starts.

Curtis was out of action the past couple of days, presumably due to injury.  Bob Gretz at CBS Sports characterized it as an ankle injury at one point.

Curtis' release shouldn't come as a huge surprise.  A few weeks ago, I noted that his previous team, the Dallas Cowboys, weren't going to miss him.  Here's what one writer for DallasCowboys.com had to say:

Of their five restricted free agents, he was the only one the team didn't even attempt to re-sign. He had the physical tools to do the job, but you had to worry about where his head was sometimes. He was good for about one mental error a game - some obviously worse than others.

Mental errors won't cut it with these Chiefs.  He was definitely a fringe player to begin with having been placed on and off the Cowboys practice squad multiple times over the past few years.

This leaves the Chiefs with four tight ends on the roster: Brad Cottam, Sean Ryan and rookies Jake O'Connell and Tom Crabtree.

The Chiefs also "officially" announced the addition of OLB Vince Redd off the waiver wire and the release of Edwin Harrison.  Adam Caplan of Scout first reported the Redd signing and Adam Teicher of the Kansas City Star first reported the Harrison release.