Schefter: 'Sounds like' Chiefs QB Matt Cassel Will be Ready Week One

Share All sharing options for: Schefter: 'Sounds like' Chiefs QB Matt Cassel Will be Ready Week One 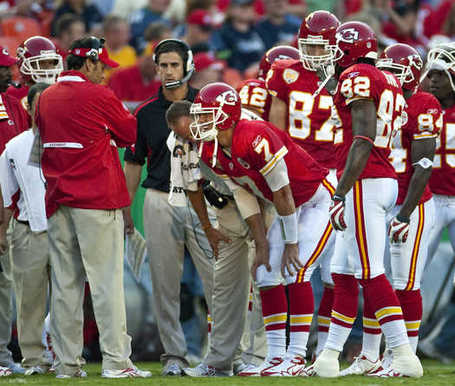 Photo via John Sleezer of the Kansas City Star

ESPN's Adam Schefter reports that it sounds as if Kansas City Chiefs quarterback Matt Cassel will be ready come week one when the Chiefs play the Ravens.  He says that when the team travels to Baltimore in about two weeks, they expect Cassel to be the starting quarterback.

The opener is on September 13th, which is 14 days away.

Jason Cole of Yahoo! Sports reports that Cassel could be out 2-4 weeks depending on the severity of the injury.

Schefter also reports that the Chiefs never really thought about trading quarterback Tyler Thigpen and he will be on the Chiefs opening day roster.

He was emphatic when he said the Chiefs will not trade Thigpen.

Schefter is one of the most trusted names in sports reporting so when he talks about the two biggest Chiefs stories in the last month, we listen.