Chiefs QB Brodie Croyle Talks About Cassel, Gailey and Being a Backup

Share All sharing options for: Chiefs QB Brodie Croyle Talks About Cassel, Gailey and Being a Backup 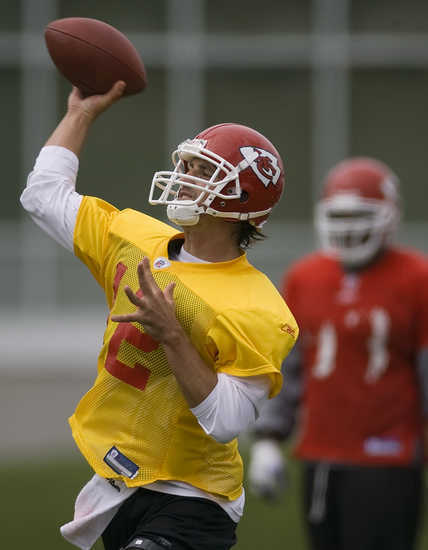 Throughout training camp, Kansas City Chiefs quarterback Brodie Croyle has consistently outplayed his competition Tyler Thigpen according to multiple practice reports.  The sentiment of many around here was that if Cassel went down, Croyle would be the pick to replace him.

Well, Cassel did go down and Thigpen was the pick to replace him.  However, the plan heading into the game on Saturday night was the trio of Cassel, Thigpen and Matt Gutierrez seeing playing time so Croyle didn't play.

With Cassel still down, Thigpen was the pick to run with the first team today.  The coaching staff has indicated that it doesn't mean anything.

I'm not sure that the starter in Thursday's game matters a whole lot.  It's still up in the air who will start week one at Baltimore.  If Cassel's ready he'll presumably be the guy but the coaching staff has had well over a month of almost daily practices to evaluate Croyle and Thigpen so a starting nod on a meaningless Thursday night game shouldn't mean much.  Some might disagree because there's definitely two sides to this argument.

Carrying on, Brodie Croyle spoke with reporters following practice today and said he hasn't heard whether he or Thigpen will be the starter on Thursday assuming Cassel can't go.  He was also asked about replacing Chan Gailey and whether he feels he should be the number two quarterback heading into the season.

610 Sports played the interview.  Here are a few notes I took regarding the exchange.

Will Chan be back?

Does Cassel's injury change how you prepare?

"Doesn't change at all.  Anytime you're backing up you always have to be ready to go at any point in time. Whenever Matt's back obviously it's his game but we have to fill the void until then."

On coming back from the knee injury and starting:

"That's what you're working for. You don't work back just to make a paycheck or hope you make a team.  If you're going to rehab from something like that you have something in mind."

Does this change how you prepare?

"I'm just going to go out there and play."

Does the offensive gameplan change now?

"A lot of it's still the same.  There's going to be some new stuff here and there.  They call the plays.  All we do is run them. That's just how we have to look at it."

Did Chan call all the plays?

"He was the offensive coordinator and he called the plays.  Obviously, Todd had a lot of input in that."

On being ready as a back up:

"Yeah, I mean you gotta be ready for it.  This is what I've rehabbed for and what I've tried to get back for.  It's unfortunate for him and who knows the time table on when he'll be back.  When it comes time to go, I gotta be ready to go."

Can you win with whoever is at quarterback?

"Yeah that's what they got us on there for.  Try to find a way to win games."

Do you feel you should be the No. 2 quarterback?

"That is not my decision. I just go out there and try to have good practices, stack 'em up and play good in preseason games and whatever happens, happens."