Report: Chiefs WR Devard Darling 'Likely' Out for the Year with Torn ACL

Share All sharing options for: Report: Chiefs WR Devard Darling 'Likely' Out for the Year with Torn ACL 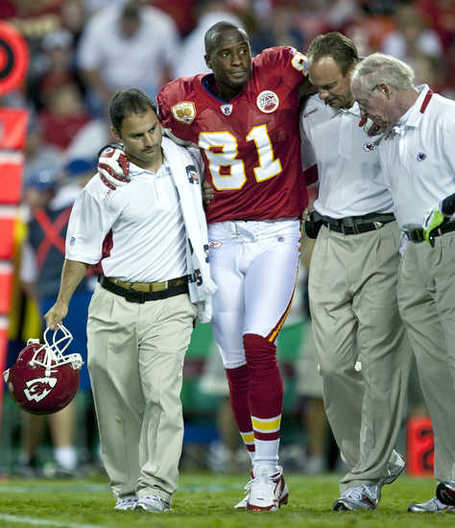 Mike Florio of Pro Football Talk is reporting that the injury to Kansas City Chiefs starting wide receiver Devard Darling is severe.  So severe, in fact, that he's likely to miss the entire 2009 season.

Lost in the concern over Chiefs quarterback Matt Cassel and cornerback Brandon Flowers is that receiver Devard Darling -- currently listed as a starter on the team's depth chart -- might be gone for the year.

Per a league source, Daling "likely" suffered a torn ACL on Saturday night against the Seahawks.

Wow.  Darling left the game in the first half and had to be helped by two trainers as he exited the field and headed to the locker room.

Darling was previously competing with Mark Bradley and Dwayne Bowe, among others, for a starting position.  The Chiefs initial unofficial depth charts had him listed as a starter.  However, to be fair, Terrance Copper was also listed as a starter and most would agree that he is a candidate to be cut in the next week.

If true, then this is just another example of the dangers of the NFL preseason.  Darling, a player who some thought might not even make the team, will now receive an injury settlement from the Kansas City Chiefs should they decide to part ways with him.

In the long run it probably won't affect Matt Cassel and the Chiefs offense a great deal but this is not a position group that can afford to lose anyone, let alone one of the veterans.

So, who's the player that will replace Darling on the roster if he is indeed done for the year?