Share All sharing options for: Jaguars Add a Quarterback Not Named Tyler Thigpen 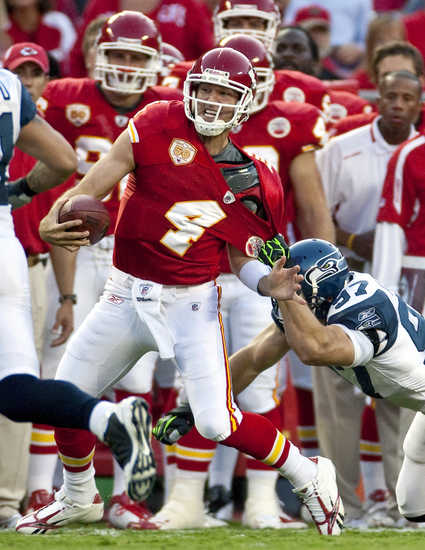 The Jacksonville Jaguars have signed a quarterback not named Tyler Thigpen.  Instead, it's former Ohio State Buckeye Todd Boeckman.

(Photo via John Sleezer of the Kansas City Star)

What does this mean for the reports that the Chiefs and Jaguars were talking trade?

My guess is nothing.  Boeckman was originally signed June 17th as an undrafted free agent.  He was cut on July 31st to make room for a third round pick.  If the Jaguars were looking for a back up to starter David Garrard, then Boeckman probably isn't the guy.

Currently, Todd Bouman is the backup.  He's 37 and probably not the answer the Jaguars want at the backup quarterback position.

So, in my estimation, the need for a backup to Garrard, who struggled in a five win season last year, still exists.

If the Jaguars weren't happy enough with Boeckman to keep him on July 31st then what, exactly, has changed?

After last night's performance, it's been argued (and rightfully so) that Thigpen's stock is down.  I think both sides are aware of that.

I haven't the slightest idea if Thigpen will be traded.  But if he does, I would guess it would happen this week.

Here's a quick timeline of the Thigpen trade talks that have gained some steam in the last week: