Share All sharing options for: Chiefs RB Larry Johnson Content With His Performance in Loss to Seahawks 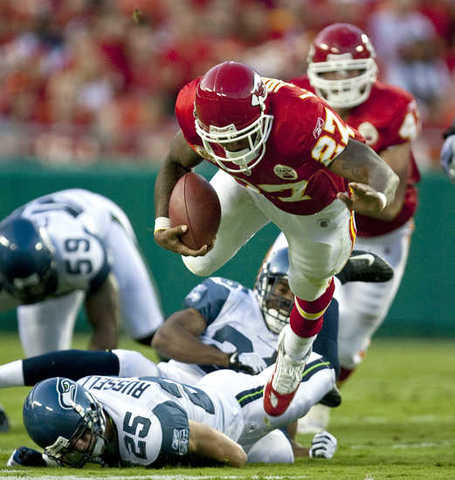 Kansas City Chiefs running back Larry Johnson seemed content with his performance following Saturday night's 14-10 loss to the Seattle Seahawks.  He finished with eight rushes for 36 yards, which equates to a healthy 4.5 yards per carry average.

Two of his eight runs went for first downs and two more brought the Chiefs within one yard of the first down marker so the production is there.

He did play until he was removed with about five minutes left in the second quarter.  That's not a whole lot of time for a back like Johnson, who has previously said he needs more carries to establish a rhythm.

"I wish I could have stayed in more and gone after it," Johnson said.  "But having this kind of a game as far as running the ball and knowing where things are going to end up is pretty good to have that going into a tough Baltimore team."

LJ also joined Tyler Thigpen in saying the offensive line did their job.

"There was some good spacing, and some good holes and then things would be able to open up for us. We just had to keep staying with it, even if some of the reads were maybe a little wrong, we were still able to make yards."

Now, how true that is is another matter.

He and Jamaal Charles combined for 90 yards on 15 carries for a hearty six yards per carry average.

"We’ve played these guys before and I had a pretty good game," Johnson said.  "Us coming in and really wanting to run the ball and see what we could do with the run kind of worked out for us."

If this is a sampling of what we can expect from Kansas City's version of thunder and lightning then I can say I'm excited.  Over the course of a game I feel that Johnson's power and Charles' lightning quick moves can be a much needed asset in the Chiefs offense.

After the jump, I've broken down all of LJ's runs by drive.