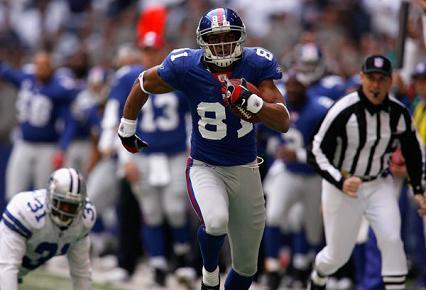 Citing two NFL sources, Williamson said the deal could get done "as soon as Tuesday if the Chiefs follow through with their current thinking."

As Williamson notes, a Toomer signing would be very beneficial to a young Chiefs wide receivers corps.

He has a reputation as being a leader who helps young players. He has 668 career catches and a Super Bowl ring to show his young teammates if he ends up in Kansas City. He is less than two years removed from winning a Super Bowl (over Pioli's Patriots). That type of veteran experience can only help.

Williamson speculates that Toomer would play a similar role to that of another veteran addition this offseason, Bobby Engram.  In fact, a Toomer signing would also show the Chiefs are doing on offense what they did on defense - adding veterans that know how to win.

I for one am excited about the possibility of Toomer being added to the squad. Yes, I know he'll be 35 next month but this is the way I look at it.  Is he better than the following players right now:

He's an upgrade, even with his age. As Haley has demonstrated in the past, this is about getting the best players on the field and Toomer represents an upgrade.

The Chiefs should make this deal. Like Mr. Williamson says, it won't make them an instant playoff contender by any means but it's a way of slowly planting the seeds for future success.  As GM Scott Pioli says, it's not just about building a team for one championship - it's multiple championships.

I think the following Pioli quote speaks volumes:  'I'm not looking to come in here and build a franchise for just one season. My goal, my objective, is to be here for a long time and have a lot of good seasons.'