Chiefs Claim OLB Vince Redd Off Waivers from the Patriots

Share All sharing options for: Chiefs Claim OLB Vince Redd Off Waivers from the Patriots 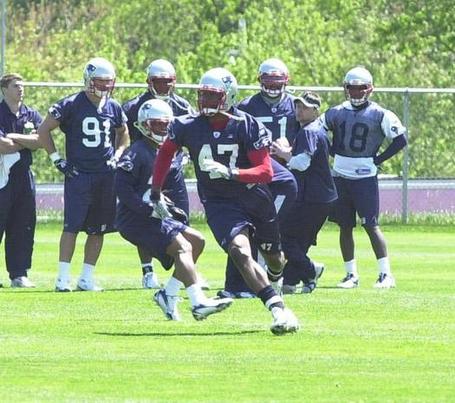 The Kansas City Chiefs have claimed outside linebacker Vince Redd off of waivers from the New England Patriots according to Adam Caplan of Scout.

A 6'6", 260 pound outside linebacker, Redd saw limited action in five games with the Patriots last season. He was signed as an undrafted free agent on May 2, 2008 and appeared in five of the team's final six games accumulating two tackles.

From what I can gather, he's a special teams guy.  Here's what Pats Pulpit had to say about him:

A productive special teamer, Vince saw action in 2008 as a reserve.  With a year in the system under his belt, he'll be a nice reserve option when called upon and a necessary guy on special teams.

The irony here is that he was thought to be one of the candidates to try and replace Mike Vrabel, who was sent to Kansas City in a trade.

Here's the deal with the roster number.  This makes 82 players on the official roster.  80 is the maximum for training camp.  One, Tyson Jackson hasn't signed so his spot doesn't count. Two, players on the PUP list do not count towards the 80 man roster (for now).

I'm still keenly watching the roster list to determine if anyone has or will be cut.

The Chiefs are third in the waiver wire so the Detroit Lions and St. Louis Rams passed on him.

Redd went to Liberty and hails from Elizabethton, TN.

Edit: I added a few links and quotes after the jump

What do you feel is your greatest strength as a football player and what area do you feel you need to improve in?
Vince Redd:  Strengths are my vision and my wingspan and I need to work on my overall strength.

As a sturdy player who runs well enough to play on the punt team, the 6-foot-6, 260-pound Redd had shown promise toward the end of the 2008 season.

"I just think where we are defensively, there are probably other teams that he might fit a little better schematically, with the skills that he has," Patriots coach Bill Belichick said.