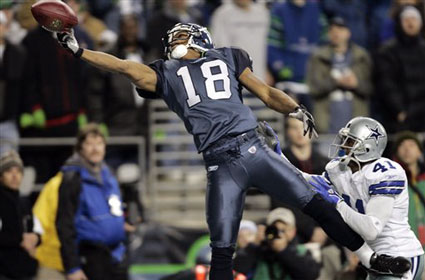 Yesterday, Jason LaConfora of the NFL Network reported that the Kansas City Chiefs were going to work out free agent wide receiver D.J. Hackett today.  That report has since been confirmed by Adam Teicher of the Kansas City Star.

According to his player page on KFFL, he has worked out with a handful of teams this offseason.

To add some more interest around the workout, the insanely detailed UW-RF staff talked about a closed practice (H/T Zodeman) that took place on Ramer Field after the morning session.  The UW-RF staff reports that, "Team security turned away anyone who attempted to watch the tryouts from a distance, obviously trying to keep the identities of the players involved a secret."

Interesting.  So, from what we can tell, the Chiefs hosted a few try out players:

Who's your best guess?