Share All sharing options for: Chiefs Training Camp Update 8/3 AM 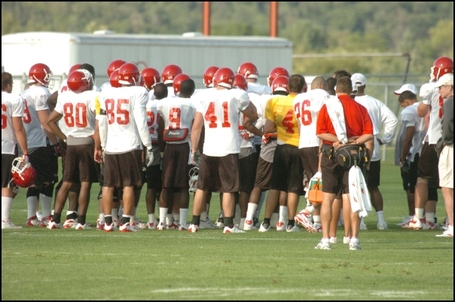 Josh Looney over at the Mothership calls today a "hump day" because the excitement of camp is wearing off and the mental and physical aspects of camp become more taxing.

It will be interesting to see how this team responds to another set of two-a-days following three high-energy practices. The pre-camp adrenaline rush has likely faded by this point. This morning’s practice session may be a mental test for this team, while the afternoon period will likely test the physical side of things. Ice baths between practices keep the legs fresh and are a must hump day.

The team started the day with position drills and moved onto 11 on 11 work.

After the jump, we've got updates from all the usual suspects.  This post will be updated as more info from UW-RF and Bob Gretz comes through.