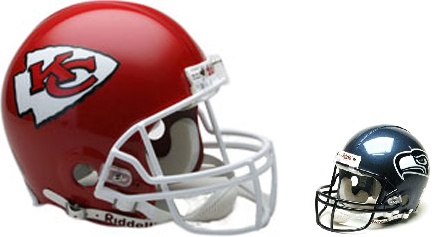 Blogs posts so far about this game: Full coverage

Tonight, Kansas City Chiefs fans will watch their team take on the Seattle Seahawks, in the third preseason game of 2009.

You can follow the Seahawks chatter over at Field Gulls and follow live game stats over at NFL.com.

Last weekend against the Texans, AP racked up nearly 1,800 comments during the game which I do believe is some sort of record. I expect more comments tonight, considering how much we'll see the first team play tonight.

Once these open threads hit about 450 comments, I'll open up a new thread and link to it. For the newbies, during game time is one of the few times that the language around here, let's say, is more colorful than it normally is. That's a game time only relaxing of the normal protocol because you know, sometimes you just need to curse violently to someone about this team.

Get your predictions for this game in early. Maybe one of you can pull a Kent Babb and guess the score exactly right. Let us know the final score and how those scores will be made for maximum effect. I'm picking the Chiefs to win, 20 to 13. Two Ryan Succop field goals of course, one TD by a minor offensive player and one Larry Johnson goal line TD dive.