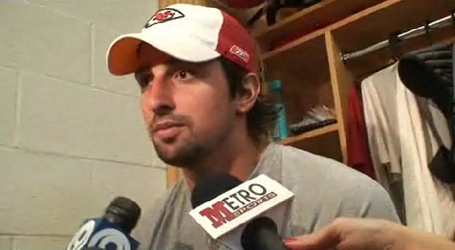 Kansas City Chiefs quarterback Brodie Croyle spoke with reporters this week following practice.  He talked about the pressure that comes with being a starting quarterback, his rehabilitated knee and the Seattle Seahawks defense.

The Kansas City Star has a video of Croyle's session which you can view here.

There's no real "news", but it's nice to hear that his knee hasn't been bothering him.  Apparently, he hasn't even thought about it.  From what I've heard, the mental block of being able to play on an rehabilitated knee or leg is, for a quarterback who faces the pressure of falling linemen every play, the hardest part.

Watch the video or if you're Internet surfing instead of working you can read my notes below.

On the pressure of a starting quarterback

"You know a starter's got the pressures that go with that .  As I said, you just roll with the punches and go with whatever role it is you have and let the chips fall where they may."

On his knee (he's coming off of injury):

"I think so. I feel pretty confident in it.  It hasn't really given me any trouble and I hadn't thought about it.  So ,it's been a plus for me."

On playing time against Seattle:

"I really don't.  I got to play a bunch in the first two games so I think they're going to try to get a look at Tyler and Matt.  I could go in the third quarter or I could not play.  I just don't know exactly how it's going to go."

On proving himself despite injuries:

"Yeah.  You're always out there to prove yourself.  It doesn't matter who you are.  You always want to prove that you're better and better.  As I said, my thing has been injuries so I just have to prove that I can stay healthy."

On the wide receivers:

"You know they're getting better and better.  We've put in a lot of new concepts, a lot of things to help them out.  I think we've had a good camp and I think they've gotten better every practice."

What do you know about the Seattle defense?

"They fly around.  They're very athletic.  They have two good ends.  Their middle linebacker is a really talented player.  They switched things up a little bit from last year.  I think they adapted more to a morris style of defense.  But I think it's just a typical 4-3 look."