Who Will be the Chiefs Starting Nose Tackle in Week One?

Share All sharing options for: Who Will be the Chiefs Starting Nose Tackle in Week One? 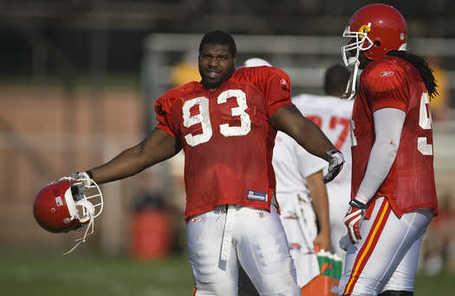 Regardless of the competition or challenge, we're the heart of the defense and the team. Nothing happens without the defensive line. We have to stay together as a unit.  Nothing is personal, everything is business.   -Chiefs NT Tank Tyler

This prompted two of our favorite sources of Chiefs information, Josh Looney and Bob Gretz, to talk about the nose tackle.

Nose tackle is probably the most physically demanding position in all of professional football. The number responsibility is to control the "A" gaps, hold ground and keep offensive linemen off the linebackers. A nose tackle that is unable to do his job makes the 3-4 scheme susceptible to big rushing days.

And here's what Mr. Gretz said this morning:

And then there are times when they disappear. For the 3-4 to be successful there can be no disappearing acts from the nose tackle.

Likely the most important position on the field (in a 3-4) other than the quarterback, it starts and stops with the nose so it is absolutely critical the Chiefs 'get it right' with this one.

Definitley check out those articles.  A little more on Tank and why I'm excited for him this year after the jump.

If you've been reading what I've been typing, then you know I'm a big Tank Tyler fan.  As Haley said yesterday, nose tackle is a "man's position" and remembers Tank as a "bad dude" coming out of college.  I remember a 300+ pound lineman putting up more reps on the bench press than any one else at the 2007 NFL Combine.

He played a little nose tackle in college at North Carolina State along with three future first round picks: Mario Williams (#1), Manny Lawson (#22) and John McCargo (#26).

Maybe he was a product of the system with all that talent around him?  Doubt it.  Those players left before Tank and here's the difference:

We've talked about this before (here) but with Looney and Gretz talking nose, I wanted to take one more opportunity to explain why I'm so jazzed for Tank this season.  He's been getting the first team reps lately, but Edwards has been getting the majority of them throughout camp.
So, we'll see how it pans out but it's definitley a competition to watch leading up to Baltimore.
We started with a Tank Tyler quote, so I'll end with one.  On his expectations this year:
Initially I always take this approach:  Why wait? We have to aim high, aim for the Super Bowl, aim for the playoffs. Can't think like 'Oh let's win more than two games'.  Let's be champions.  We gotta train to be a championship team and go out and play that way and think that way mentally.  I'm aiming for the top and I'm sure the rest of my teammates will have the same mentality.