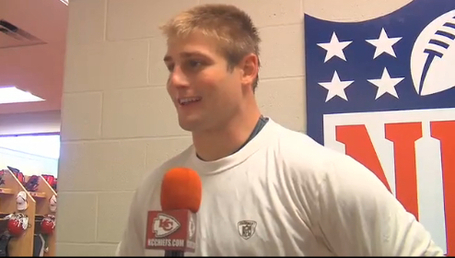 He's really got a pretty interesting story.  He was signed late last season (November 18th) by the former regime.  As we've all come to know, no one is safe, especially a guy a 2-14 team picked up in the middle of the year.

He's survived this far, though.  Actually, Studebaker (yes, like the car) is currently listed directly behind Mike Vrabel on the Chiefs unofficial depth chart.  Whenever Vrabel takes an afternoon off, or doesn't practice, Studebaker has been in with the first team.

He comes from a Division III school, which for some reason, I think Todd Haley and Scott Pioli almost prefer.  The blue-collar, lunch pale kinda guys.  The ones that know they always have something to prove.  The ones who will push all the others on the team with the effort.

Anyway, here's a link to the video on Andy Studebaker courtesy of the Mothership.  Below, I took notes on their exchange.

"It's good man.  It's nice having the one year under my belt.  Coming from a small school last year, the adjustment was big. I just feel a lot more confident this year coming out.  I've kinda seen the competition and been on the field a little bit.  I feel like I belong here. I just feel like the transition is a lot easier."

But it doesn't seem like it's too big for you, whether it's on special teams or scrimmage downs.  Why is that?

"It's a level playing field.  If you get caught up in where guys came from...

"If you're caught up in the fact that the guy next to you went to LSU or Florida or one of these big schools I think it just gives you a disadvantage.  It's a level playing field out there so you have to do your job.

"So, you just have to approach it like, well, they're trying to win a job too.  It doesn't really matter where you came from as long as you understand you have to go out there and compete."

Some of the best players in Chiefs history came from small schools.  How much of an encouragement or inspiration is that?

"It's nice. There's guys all over this league there were unheard of in college and I'm one of those guys.  It's just a testament that shows hard work pays off a lot.

"Getting in that playbook, getting out in practice and approaching every day like it's your last gets you a long way I think.  No matter where you came from you got a shot in this league as long as you're out there producing and working."

Todd Haley mentioned you in the offseason the way you approached the offseason program.  You look different.  You don't even look like the same guy.  What about your offseason and how you purposed yourself?

"We knew we had a new set of coaches coming in.  I didn't know exactly what position I was playing.  I was still kind of a new guy coming in here late last year.  I just thought, you know, this is my opportunity to make a statement about what kind of player I'm going to be in the league.