Larry Johnson Talks About the Old Chiefs and the New Chiefs

Share All sharing options for: Larry Johnson Talks About the Old Chiefs and the New Chiefs 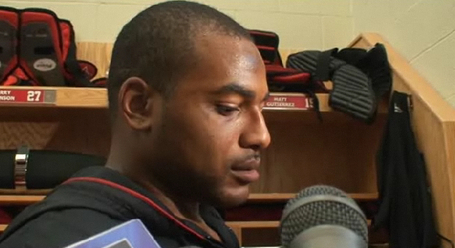 Update 5:09 PM: I included a few more questions of the entire interview (courtesy of 610 Sports) at the end of the post.

Larry Johnson spoke to the media following the Kansas City Chiefs practice today.  This is definitely the 'New LJ'.  He was asked about Matt Cassel, Scott Pioli and Herm Edwards.

He was given a shot to criticize Edwards for benching and fining him last season but didn't bite.  A restrained LJ?  Good to see.

The title of the video is 'Larry Johnson in a candid interview'.  I wouldn't go that far but it's still worth a look.

The video, courtesy of Allison Long of the Kansas City Star, can be viewed here.  Below, I've taken notes on what you'll watch on the video.

What's your evaluation of Matt Cassel?

"I mean, he's the perfect guy for the job.  A guy that stands tall and has been with a team that has been to the Super Bowl.  So, he knows what it takes and being a great understudy for Tom Brady so you can't ask for much more than that as far as his leadership role."

"As far as what Todd Haley and Scott Pioli are doing, they're not settling for 2-14 and a group of guys that were okay and comfortable with being 2-14.  They went to get guys that want to be 16-0."

"Having those guys, including Matt Cassel, being part of the Chiefs it made me excited to be a Chief because we feel, with those guys, we have a chance."

"It's not based off my happiness or sadness to be a part of this team, it's just the fact that we are organizing and doing things to be a 16-0 team and go to the playoffs.  So, this team rising and falling doesn't stand on if I'm happy or if mad here.

"Obviously, we have to do a job and my job is to do the best on that football field and to make this team a better team.  Of course, the guys they're bringing in or taking out will be part of that transition."

On Herm Edwards fining and sitting him:

"I don't think it's a grown-up thing.  I think it's just smart as far as using your head in certain situations and being able to come into a new situation and take all that into heart knowing that they could have gotten rid of you, except they kept you.

"You just kinda play the cards you're dealt right now and see where it leads you."

On Kansas City in general:

So I'm still here. I didn't put my house for sale. I didn't move or do any of that stuff."

Did Herm Edwards and Carl Peterson "settle" for 2-14?

"As far as doing things their own way, I never blamed them for that.  As far as Pioli, he definitely shed a different light.  When we didn't have guys that could fill the shoes, we didn't go out and gets guys off the street. We went and got guys that actually played in this league and were successful in this league."

Is this the toughest week of the year (before cut downs)?

"I thought, since we started up to this point, it's been tough.  We usually we didn't hit this much.  We weren't in pads this much.  It's a little more anxiety for the guys who felt they wanted to have all their marbles to compete because it may be their last chance to ever be part of the Chiefs or an NFL team period.  I think for them it's a little harder because it's a lot of pressure on them."