Open Competition? Chiefs' Thigpen Says it Doesn't Feel Like It 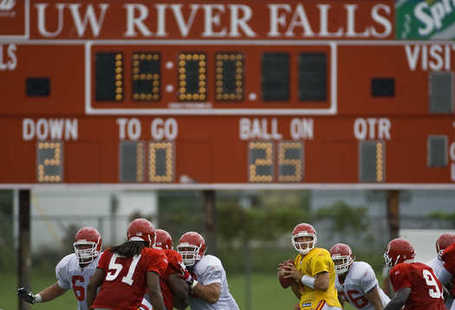 Kansas City Chiefs head coach Todd Haley has reiterated time and time again, almost to the point of annoyance, that every position on the roster is an open competition.  That includes the quarterback, where the Chiefs just invested nearly $30 million in guaranteed money to Matt Cassel.

But the vast majority of folks believe this is Cassel's job regardless of who puts up the better performance in camp.  Even Haley has really only wavered once on Cassel when he didn't answer a reporter's question of whether Cassel had been the best quarterback in camp.

And so we can add Tyler Thigpen to the list of folks that don't believe this is an open competition.

"I don't feel like I'm competing for the starting job," Thigpen said after practice according to Kent Babb of the Kansas City Star.

Thigpen acknowledged very early on in the process that he was more than likely going to be a backup on the Chiefs roster.

So, the story continues to turn.  More quotes from Todd Haley and Matt Cassel after the jump (courtesy Bob Gretz and Josh Looney).

"He was sharp and the ball was coming out quick," said the head coach. "It’s a critical, critical drill for us and with the quarterback the ball has to come out quick. Today it was zipping around and going to the right spots."

Cassel on preparing for Seattle:

"Right now, we’re still in training camp mode," Cassel explained. "This isn’t like a normal game week, we’ve got two doubles days this week. We’re treating this more of a camp week, and as we move forward, I think we’ll really start to tighten the screws down on getting more focused on Seattle."

Cassel on taking a sack:

"You try to get rid of the ball quickly and you try and make plays happen when you can, and sometimes what happens is you get sacked," Cassel said. "That’s part of the ballgame. As long as you’re not turning the ball over and making costly errors, which a lot of times, some quarterbacks would rather throw the ball up, and all of a sudden something bad happens - that’s not what we want to happen. If I have to take a sack, I’ll take a sack."