Chiefs Move AM Practice Inside Due to the Weather

Share All sharing options for: Chiefs Move AM Practice Inside Due to the Weather 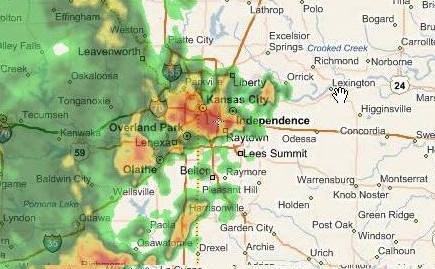 Yes the weather photos are back.  The Kansas City Chiefs have moved this morning's practice inside due to the inclement weather (thanks for the heads up, ChiefsPR).

The National Weather Service seems to think it will continue to rain for the majority of the day.  The kicker, though, is that it's supposed to rain and lightning this afternoon which would likely put the Chiefs indoors again this afternoon.  But, as I've learned over the years, weather people can be wrong.

Okay, I'm done pretending like you all care about the weather updates today.  At this point, it's Thigpen-trade speculation.  Jason LaConfora has fleshed out his report a little bit on his blog but the meat of it hasn't changed.

Thigpen has also shined at times in the past and did some nice things last season when starting for the Chiefs. He would welcome the opportunity to move on to an organization where he might have a better shot of getting on the field, according to a source. To this point the Chiefs have been seeking draft-pick compensation higher than the fifth round, according to a source, while the Jaguars have been dangling a fifth-rounder.

Adam Schefter of ESPN is reporting the Chiefs are looking for a third round pick.

I've flipped through the archives and found a few places where we previously discussed Tyler Thigpen and his trade value, among other things.  Make the jump to check it out.

With Cassel on board, what's next for Chiefs Thigpen?

Back on March 2nd, days after the Cassel trade, here's what I said:

But with the Chiefs trade for Matt Cassel the question doesn't have to be answered anymore. We've got our quarterback and he will likely hopefully sign a 5-6 year deal in the coming months putting to rest the talk that Thigpen will be the starter in 2009.

Since he's been all but ruled out for the starter's job in '09, what's next for Thigpen?

Is there a better No. 2 than Chiefs QB Tyler Thigpen?

Maybe a little premature, especially since recent camp reports (and the Tweet heard round Arrowhead Pride), but here's what I said back on July 10th:

The Kansas City Chiefs certainly don't have any definitive answers at the QB position but there are two players to feel pretty good about it: Matt Cassel and Tyler Thigpen.

With Cassel the unofficially the starter heading into '09, the Chiefs might have the best back up quarterback in the NFL when factors like age and money are considered.

I could have been wrong here.