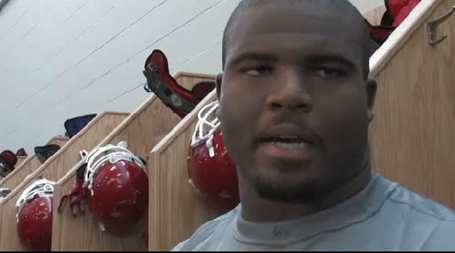 We've got the first video of Ikechuku Ndukwe and Andy Alleman as Kansas City Chiefs.

Ndukwe said it looks like the team is looking at him as a right tackle.  Alleman says he hopes his versatility can help the team.

The Kansas City Star has the video here. Below are notes I took the video.

On whether he knew what the Chiefs gave up for him:

"I'm not sure.  Andy and I were joking earlier we thought it was maybe a pack of chicklets and an old fingernail clipper.  We weren't sure but it doesn't matter.

"We're here. We're happy to be here.  I can only speak for myself but I know Andy is also."

On learning the offense:

"A lot of the plays are similar but it's the verbage.  It's a lot of different vocabulary but we're getting used to it.  It's a great opportunity and we're happy to be here."

Where are you going to play?

"Right tackle. Right tackle is where I was told that I needed to work the most at.  I appreciate them giving me the opportunity to learn one position.  Even though the plays are similar it's still a lot of different verbage."

"There's obviously some new plays, obviously, no offense is the same, but things are similar."

What do you bring to the table?

"I have the ability to play both guards and center efficiently.  I don't know that I necessarily have a best where I line up.  I feel I can do a good job. I bring versatility.

"I've had a couple coaches now.  This is my third team so I've got a few years under my belt.  I got to play some games last year, played in the playoffs, so hopefully I'l have a little bit of experience coming into this situation."

On getting ready for Saturday:

"Yeah, I think whenever you step on the field it's just competitive.  Someone else is lining up out there and you want to go hard.  We're just going to get the chance to do it for a little longer this time.  It will be a good opportunity for us to play.

"If there are mistakes to be made, we want to make them now so we can go over them and get it right for Baltimore."

"Really, my mission to come to the team was just to play a role in whatever capacity that might be. I wouldn't say I've proven anything yet because every day you have to come out and prove something."

Does this defense suit you?

"I feel like we're able to make plays.  We need to improve a lot more. We've given up two drives in both games and we have to stop that."

I sure see you flying around a lot and putting pressure on the quarterback.

"It's a couple of plays but, like I said, it doesn't mean anything if we don't come out the next game and do it again."