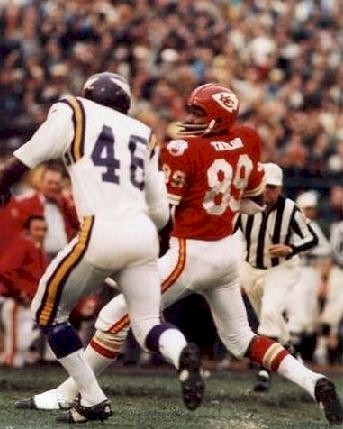 Former Kansas City Chiefs WR Otis Taylor made it to the final five of voting for the Seniors Committee nominations for enshrinement to the Pro Football Hall of Fame.  The problem is that only two candidates were selected.

Taylor wasn't one of them.

The way the Seniors Committee works is a nine person panel will receive a list of eligible nominees.  Via mail-in ballot, they'll knock those names to a list of the top 15 candidates.  Five members of the nine person committee will then meet in Canton to decide who they'll nominate for enshrinement.

And, according to Bob Gretz, Taylor made it to the final five but ultimately was not selected as a Seniors nominee.  Close, but ultimately no cigar.  The final five placement is, however, an awesome accomplishment in itself and only serves as a stepping stone for next year.

The Seniors Committee selected two nominees - Dick LeBeau and Floyd Little - from a list of players who's careers have been over for at least 25 years.  Those two players are then presented to the Hall of Fame voters and must receive, like the modern day candidates, 80% of the vote for entry into the Hall of Fame.

Some older folks on the site can clue us in on some details of Taylor's impact to the Chiefs.  An "older" person I know, my Dad, once laid out the Taylor-HOF debate very simply: 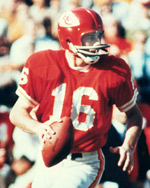 If Len Dawson is in the Hall of Fame then who was he throwing to that whole time?

Of course the argument of receptions, yards and touchdowns goes much deeper than that but it's something I always remembered.

In 11 years, Taylor played on only two teams that did not finish with an above .500 record.  He was top five in receiving yards in the AFL/NFL on four occasions. He led the NFL in yards per receptions once (his second season) and finished in the top ten in three other seasons.

For a seven year stretch, Taylor was consistently near or at the top list of wide receivers.  Because of the era he played in, his stats aren't as gawdy as other, more recent candidates to which we compare him.  But, for those seven years, Taylor proved he was one of the best in the NFL.

The Chiefs won 70% of the time when Taylor went over 100 yards receiving.

More importantly, he was top ten in receiving touchdowns on five occasions.

And it's time the Seniors Committee carve a spot for Otis Taylor's bust in the Pro Football Hall of  Fame.

On a semi-related note, Taylor's son, Otis Taylor III, tried out for the Florida Tuskers of the UFL last week (news comes courtesy of Steve Kaut at NBC Action News earlier this month).  Over 1,000 participants paid $60 to the club for the opportunity to work out.  The Tuskers have been announcing additions to their squad over the past couple of days and it doesn't appear Taylor made it.

Wouldn't it have been fitting if Otis Taylor III started his professional football career the same day the original Otis Taylor fittingly ended his?

Update: Randy Covitz of the KC Star has an article up about this topic as well