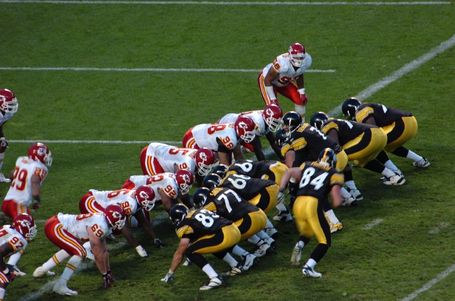 On November 22nd, 2009, the Kansas City Chiefs will return to Arrowhead Stadium for the first time in 27 days to host the defending Super Bowl champion Pittsburgh Steelers.

There are a lot of reasons to fret about this week 11 match up.

Our predictions thus far in these previews have placed the Chiefs at 3-5.  Not bad, right?  Well, in week 11, we're talking about the only team that could challenge the Patriots for the team of the decade title.  This is going to be a tough, tough match up.

I rarely walk into a Chiefs game thinking it's over before it starts.  The last two years this has occurred more frequently but, for the most part, I usually think the Chiefs have a shot even if it's a two-kick-returns-for-TDs-and-four-interceptions type wild guess prediction.  This game, however, I'm nearly close to conceding three months before it kicks off.

One thing about the Steelers is that they beat the teams they should.  Sounds simple, right?  Yet so many teams have a slip up against a team that they should, at least statistically speaking, dominate.

The Steelers four losses in '08: Eagles, Giants, Colts and Titans.  All difficult games and no "slip up" losses in there.

Not only do they beat the teams they're supposed to but they usually don't even keep it close.

Maybe the Chiefs are one of those three teams that keep the game within a score and have a shot to win it in the fourth quarter.  Or, maybe, they're one of the teams with a two to three touchdown deficit.

It's not quite December, when the Chiefs have been nearly unbeatable in Arrowhead, but it's possible the weather will be getting snowy or, even worse, just plain finger-breaking cold.  Just the way the Steelers like it.

And, really, it's just the way the Chiefs should like it.

The Steelers were 29th in the NFL in yards per rush.  Only 10 teams ran the ball more than them but only three teams did less with those carries.

Roethlisberger isn't going to set the world on fire with his passing.  He was just under 60% completion percentage in 2008.  From a statistical standpoint, this tells me one of the Chiefs chances at victories: Stop the run and make Roethlisberger beat us.  Sack him, like he was 46 times last year (and 47 the year before and 46 the year before that).

Getting to Roethlisberger should be the number one goal because pressure creates bad decisions and very often bad decisions turn into turnovers.

Captain obvious statement here: When the Steelers turn the ball over, they're beatable.  Yeah, that's true with just about every team in the NFL.

In 2008 the Steelers turned the ball over three or more times on four occasions.  They lost all four of those games.

They also turned it over twice in a game on two occasions.  The margin of victory in those two games?  7 and 4 points.

Easier said than done, but if we want to compete in this game, the Chiefs have to eliminate the run and create turnovers.