Keeping an Eye on the Chiefs Week One Opponent

Share All sharing options for: Keeping an Eye on the Chiefs Week One Opponent 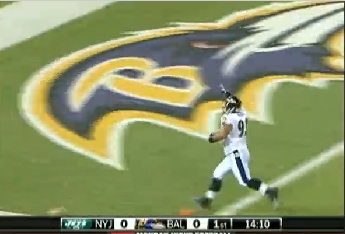 The Ravens are currently 2-0.  Here's how I can sum up the difficulty of the Kansas City Chiefs week one trip to Baltimore:

The Ravens defense scored more points in last night's game than the Chiefs have since December 21, 2008.

The picture to the left is 345 pound Haloti Ngata returning a 25 yard interception for a touchdown.

The Ravens defense was constantly in starter Mark Sanchez's face.  His first pass went for a pick-six to Ngata.  Ray Lewis nearly had another interception.  Jameel McClain added another defensive touchdown.

On last night's telecast, the announcers were praising Joe Flacco for having such a strong arm.  However, he completed only eight of his 18 passes last night.  If I'm the defense, I'm taking a 44% completion percentage from the opposing quarterback every time.

Flacco does have a big arm though.  Two of his eight completions went for 94 yards.  However, the other six went for a total of 26 yards.

I was hard on Flacco last year, despite the Ravens appearance in the AFC Championship game.  With a 44% completion percentage, I'll probably be the same way this year.

Here's how starting quarterbacks have fared against the Ravens defense so far in preseason:

After watching this defense last night, I'm getting more and more worried that Matt Cassel is in trouble.  They're all playmakers and consistently put pressure on the quarterback.

Cassel had a hard time avoiding sacks in last Friday's game against the Vikings and will likely be putting those legs to good use week one at Baltimore.