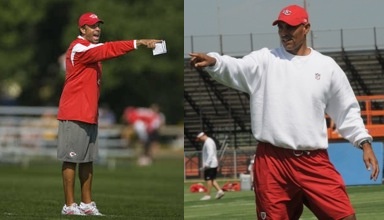 This is most certainly an exercise we'll undertake when the preseason is over and I think it's also a great conversation starter to have now on this Monday morning.

We're now two preseason games into Todd Haley's tenure as the eleventh coach in the history of the Kansas City Chiefs franchise. The tenth head coach of the Chiefs, Mr. Herm Edwards, pretty much ran this team into the ground before getting kicked out.

Will Haley do the same? I don't think so. And a quick comparison of just the first two preseason games the start of each coach's career in KC will show, even if it's just preseason, how much better of a coach Todd Haley is than Herm Edwards. Even if it's just an anecdotal feeling, it seems that back in 2006 the general feeling was that the team was on it's way down with Herm Edwards. And now in 2009, despite no wins in the preseason, a sense of optimism still prevails with Todd Haley at the helm.

Interestingly enough (or not), both head coaches opened up their careers in Kansas City with preseason losses to the Houston Texans.

Like I've been saying, the preseason is not a place to get absolute perspective on a player and comparing two different preseasons, on two different teams playing under different circumstances isn't comparing apples to apples.

But...I think you'll see in the comparison on the Herm side of signs of problems that threaded themselves throughout Herm's tenure.

After the jump, a look at Herm Edwards' and Todd Haley's first two preseason games as head coaches of the Kansas City Chiefs.

Here are some of my obseravations:

Check out the stats yourself.

Thoughts on the stat comparison? Is Haley already showing that he's that much better of a coach than Herm Edwards was?

Yeah, yeah he is. Through two preseason games you can see it! Man, Herm was a sad coach.