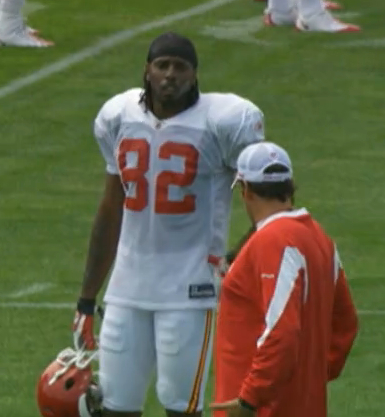 NFL Network broadcast a nice clip of Kansas City Chiefs head coach Todd Haley in action.  I'll use the word to describe his on-field attitude that everyone else does: Intense.

And I would imagine this video has been edited (a tad) to spruce up the language used during a Chiefs practice.

The video is well done and has clips of Haley during practice today.  He talks to Jamaal Charles about Friday night's fumble, works with Dwayne Bowe staying low and has a few words for Taurus Johnson.

Click here to watch the video or, if you happen to be catching this at work, I've summarized most of the video with quotes.

Haley: Did you fumble yesterday?

Haley: What, he just slapped it.

Jamaal Charles: That was my fault. I didn't cover the ball enough.

Haley: You better take care of my football.  Or you can not play.

"#9...Coach Anderson is saying accelerate after the catch and you catch the ball and just lolly gag through.  You are a rookie, free agent rookie mind you, trying to make a team.  You oughta be killing yourself after every catch!"

On LJ jumping over the pile for a touchdown

"That looked like something there.  Do that every time."

"We just gotta get some guys that decide what they wanna do.  Stop screwing around and decide whether they wanna be a player or not.  But today, clearly better."

"No one cares about us and I'm not just saying that as a coach.  It's a fact. It's clear as day.  So, we're in this together.  We gotta stick together and find a way to get a little better every day."