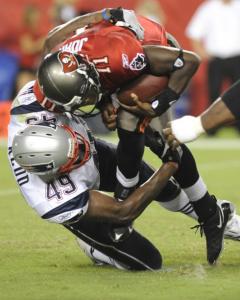 Another twist to the story.

OLB Vince Redd, who was waived by the Kansas City Chiefs on Monday, has been suspended by NFL commissioner Roger Goodell for four games beginning with the first week of the 2009 regular season, Scout.com has confirmed through a league source.

With the Chiefs set to acquire two players from the Dolphins in this morning's trade, two players had to be released.

Vince Redd was one of them.

It was presumed that he was released because, well, he hasn't really done anything during the preseason.  No tackles, no assists in two games.  But this development of an apparent violation of some sort of league policy is intriguing.

So that begs the question of whether the Chiefs about Redd's potential suspension this morning.  Perhaps the Chiefs knew what the violation was and released him before it became official.  Or perhaps it's a coincidence.

As Adam Caplan noted, Redd can still be signed by a team should he pass through waivers.  His four-game suspension would begin after the September 5th cut down to 53 players.