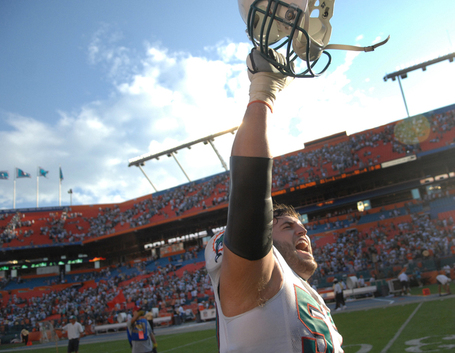 What should we make of a trade like the Chiefs recent acquisition of Andy Alleman? The greatest position of need according to pundits and fans all over Arrowhead Pride and elsewhere seems to conclude that the offensive line is killing our momentum in the running game and failing to adequately protect the QB. Thus, grabbing some more talent, especially on the right side of the o-line should be a good move, right?

Then again, some early comments on AP, at least, wonder how great a guy running with the third team for the Dolphins can be. Andy Alleman is flexible to play multiple positions on the interior of the line and showed promise coming out of Akron, but apparently that's not enough to impress Parcells and company too much. So when the need is so great, settling for someone's trash hoping it turns out to be a treasure doesn't satisfy some fans.

Yet consider this. Miami is now two offseasons into their big turnaround. They're starting to develop not only some talent but some real depth. They were able to reach for a "luxury" player like Pat White in this year's NFL draft - a reach that a team like the Chiefs would have been scorned for with so many blatant "core" needs. Thus Alleman's inability to entrench himself on the Miami line might be less about his lack of talent and more about the quality at the position for Miami.

Of course, this might not be true, but it's something to consider when looking at the teams involved. And seeing as how Alleman was a third round pick in '07 for the Saints and projected to be a second rounder by Mel Kiper and other scouting outlets, it's obvious he showed significant abilities in college.

If anything, it displays to current players like Mike Goff, Eric Ghiaciuc, Rudy Niswanger, Tavares Washington, et al. that one swift personnel move can jeopardize your standing on this Chiefs team. Thus even if Alleman can't break the starting line-up or provide much depth to those involved, it might light a competitive fire in others to strengthen the weaker side of the offensive line.

With Branden Albert and Brian Waters holding things down on the left, we're sure to be set come game time. But being unable to hold our own on the right will cripple our season from the outset. And lucky for us, no one knows that better than Scott Pioli.