Share All sharing options for: Dwayne Bowe Leads the Chiefs in Receptions, Yards 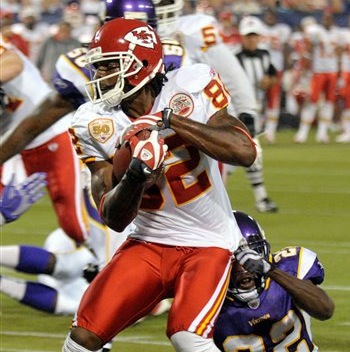 Well all of us normal, non-crazy Kansas City Chiefs fans knew that Dwayne Bowe was just fine when that flurry of media reports came out about him being third-string.

So far this preseason, Bowe leads all Chiefs receivers with 107 yards and eight receptions. Bowe isn't the most "targeted" wide receiver on the team though. That honor goes to Quinten Lawrence, who has really made his name in the receiving game instead of the return game. I sort of had him pegged as a return only guy.

I've got the preseason stat snapshot of all of the Kansas City Chiefs wide receivers, after the jump. The table is sorted from most to least receptions, left to right.