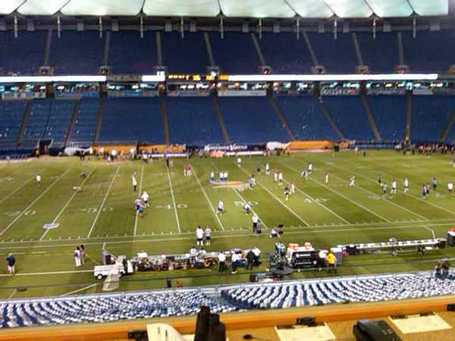 The players take the field (via ChiefsPR)

First the Chiefs news.  Looks like Matt Gutierrez will be seeing some time tonight.

The Kansas City Chiefs have officially designated Tyler Thigpen as "out" for tonight's game against the Minnesota Vikings.

Thigpen hasn't practiced since last Saturday's 16-10 loss to the Houston Texans.  The thought has been, at least for most people, that he was a little dinged up last week and needed a few days off to recuperate.

But the Chiefs aren't required to release any injury information so, of course, we've been left to speculate.

The Vikings have announced the following players are out: TE Jim Kleinsasser, TE Garrett Mills and WR Bernard Berrian.

Missing from that list is former Chiefs DE Jared Allen, who will dress.  It's still unknown if he'll play.

But back to Thigpen's status.

He had a 12 yard run late in the fourth quarter of the Texans game where he was hit pretty hard out of bounds.  He appeared a little slow getting up but continued to stay in the game.  That's my best guess for when or where an injury might have occurred.

Three other Chiefs players have been ruled out and none of them are a surprise: G Tavares Washington, RB Kolby Smith and LB Zach Thomas.  All three were out against the Texans last week.