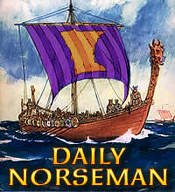 I shot a few questions over to Gonzo from the Daily Norseman to give us a little better understanding of the Kansas City Chiefs second opponent of the 2009 preseason.

I prefaced the questions with one request: No Favre talk.

Here are the questions and be sure to check out the Daily Norseman to get a quick update on the Vikings.  (If you go there now, you'll see that a quarterback won't be playing.  No, not that one.)

It's been over a year.  Simply, was the Jared Allen trade worth it?

I can give you an emphatic "yes" on that front.

The addition of Jared Allen in 2008 made a defense that was already good one of the NFL's top-notch units.  Yes, Allen had 14.5 sacks last year and all that good stuff, but according to the Football Outsiders folks, he was also second in the NFL in quarterback hurries and quarterback hits, which in my mind are every bit as important as sacks.

He was also very solid against the run, and we all know how much emphasis the Vikings put on stopping the run game, so that wass a plus.  Having Allen in the fold also opened things up for Kevin Williams, who had his best pass-rushing season in a long time with #69 lined up next to him.

Yes, the Vikings had to give up a lot to get him, but given his impact and the fact that, by all accounts, he's clean and sober now, make the purchase price well worth it.

How much time do you expect the starters to play on Friday?

Well, we picked up this new quarterback. . .it was sort of under the radar, so I'm going to have to spend some time researching before tonight's game. . .but apparently he's going to play one series tonight.  Sage Rosenfels is out with an ankle injury, so Tarvaris Jackson will take over at QB after that, and John David Booty will play the remainder of the game.

As far as actual time, I'm guessing that the starters on both sides will play significantly into the second quarter, if not play the entire first half of football.

I know the Vikings have trouble selling out tickets for home games.  The Chiefs came close to that a few times last year.  As a die-hard Vikings fan, how hard is that for you t go through each week?

Had trouble.  Apparently the new guy had an effect on ticket sales.

But, in all seriousness, it's not a pleasant thing.  I've never actually lived in the Twin Cities area (I grew up in North Dakota, but the Vikings were on TV every week), so I've never personally had to deal with "blackouts" or anything like that.  But from speaking with the people I know that do live up there and have had to go through that, it's terrible.

Viking fans are great fans. . .seriously, we are. . .but when stuff like this happens, it gives the larger perception that we don't support the team and, as a result, we get the asinine "the Vikings are moving to Los Angeles" rumors that fans of opposing teams and sites like ProFootballTalk love to parrot so much.

As a Chiefs fan who has our own fair share of problems, are the long-term solutions to WR on the Vikings roster right now?  Are they still looking to add another piece to the puzzle at that position?

I think that our receivers, if they stay healthy, are going to be a pleasant surprise this year.

Bernard Berrian is the field-stretcher that this team has been needing, and if Sidney Rice can stay healthy, he can play a big role in the red zone offense as well.  The X factor, obviously, is going to be Percy Harvin. . .how is Brad Childress going to utilize him, can he run the routes, can he get separation, all that good stuff.  If he can, he certainly adds a new element to the Vikings' offense.

A dark horse at that spot is a kid named Jaymar Johnson who spent last year on our practice squad and has been getting rave reviews from the likes of Cris Carter this off-season.  All in all, it's a far cry from the days of Travis Taylor and Koren Robinson that we had at the start of the Childress era in Minnesota.

The Chiefs gave a TON of carries to Larry Johnson when he first took the starting job and he hasn't been the same since.  Is there a fear in Minnesota that AP can be overworked?

That's the one thing you worry about with Adrian Peterson.  While many Viking fans, including myself, get a bit frustrated when AP comes off the field on third downs and stuff, it's probably not such an awful thing.  Everybody loves AP, and so they should. . .he's probably the best back in the league right now.

But we don't want an Earl Campbell-style flameout from the kid.  He had 363 carries last year, and frankly that's right about where he should be, in my opinion.  The concerns about his durability are, in my opinion, overblown, but giving a guy 400+ carries will increase anyone's likelihood for injury.