Chiefs Take on the Vikings Tonight

Share All sharing options for: Chiefs Take on the Vikings Tonight

Where: Some dome in Minneapolis

T.V.: It's on KCTV in Kansas City and I doubt it's broadcast many other places. I seem to recall last year heading to a bar to watch the first preseason game and they said DirectTV's Sunday Ticket didn't carry all of the preseason games. I'm not sure if that's true or not though.

I have to admit I'm not a big fan of the Friday night Kansas City Chiefs games, or NFL games for that matter. I always enjoyed filling up my final weekend day with football, not the last day of the work week.

This morning, to get you primed, I've got a few tidbits of info from the media guide released for this week's game. You can follow Vikings news over at the Daily Norseman. 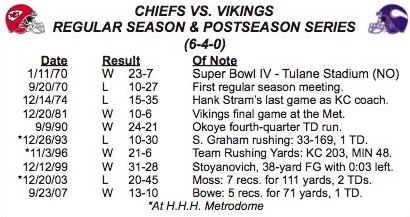 Use this morning thread to get you started today.