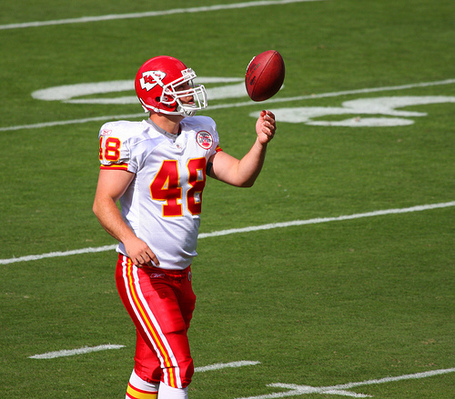 ver-sa-tile -capable of or adapted for turning easily from one to another of various tasks, fields of endeavor

It's long been part of the Patriots success with Bill Belichick and Scott Pioli.  Players 23-53 have to not only contribute at their position, but possibly several positions.  I would imagine the word versatility comes up often in the Chiefs personnel evaluations.

Todd Haley continually harps on the value of special teams.  He's pointed out that the fifth or six receiver is likely battling the sixth or seventh defensive back for a spot on the team dedicately to special teams.

"Special teams is going to be big around here", Haley said following a June 7th OTA practice. "I’ve made that clear to everybody and everybody says it. But really, the easiest way onto the team is to be one of those guys."

Little known Thomas Gafford out of the University of Houston is taking this word seriously.  He spent the final nine games on the Chiefs 53 man roster under Herm Edwards in 2008 as a long snapper.  The new regime brought in some competition over the offseason and, at one point, chose newcomer Tanner Purdum as their LSOTF (long snapper of the future? Yeah, that's an original).

Halfway through camp, however, Gafford is back and it may not be solely because of how crisply he snaps the ball to Dustin Colquitt.  He saw time at tight end yesterday and, according to Bill Williamson of ESPN.com, he may see some time at fullback.

One player. Three positions.  Oh, and, he recorded a few tackles while a Houston Cougar.  Oh, and, he was a receiver in high school and even saw time there in college spring ball.

If Gafford can prove he's worth as the third or fourth tight end, or even the second fullback, in addition to his longsnapping skills, he may want to start looking to buy instead of rent.