The Greatest Kansas City Chiefs, By the Numbers: #35

Share All sharing options for: The Greatest Kansas City Chiefs, By the Numbers: #35 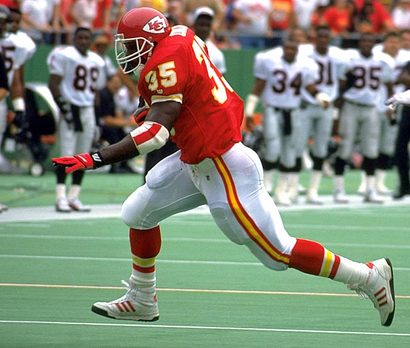 Only one of these Kansas City Chiefs to wear #35 has been interviewed on Arrowhead Pride. Do you knowwhich one?

Current #35 S Ricky Price probably won't even make the Chiefs' squad this year. He wishes he could near Willie Pile status.

When, if, we're done with these number posts, we need to have a Greatest Chiefs Name of All-Time poll. Smokey Stover has to be up there.

After the jump, we explore more about the history of #35 in Kansas City...

Drafted by the Chiefs out of UCLA in the third round, Atkins played four seasons in KC totaling 46 game appearances. He forced one fumble and recovered one more for the Chiefs. He finished his career with one season on Oakland.

Belton was a part-time kick returner and running back for the Chiefs. He racked up 136 rushing attempts; three TDs and 37 kick returns during his time in KC.

Let me guess. You thought of the guy with the big neck too? Ah, that was Merton Hanks.

A second round pick by the Bucs in 1995, Johnson spent his final seven NFL games in a Chiefs uniform. He had one sack in one start and seven game appearances. 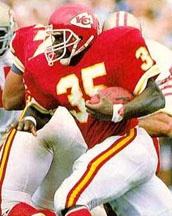 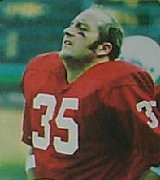 After an amazing career at Ohio St., Otis was drafted by the Saints in the 9th round of the 1970 draft. He was traded to the Chiefs the next year, where he would play for two seasons. Had had 78 rushing attempts for 276 yards as a Chief. After KC, Otis spent six years with the Rams.

Pile was a 7th round pick by the Chiefs in 2004 and he actually ended up starting five games that year at strong safety. He deflected two passes and made 23 tackles before heading to Dallas for his final NFL season. 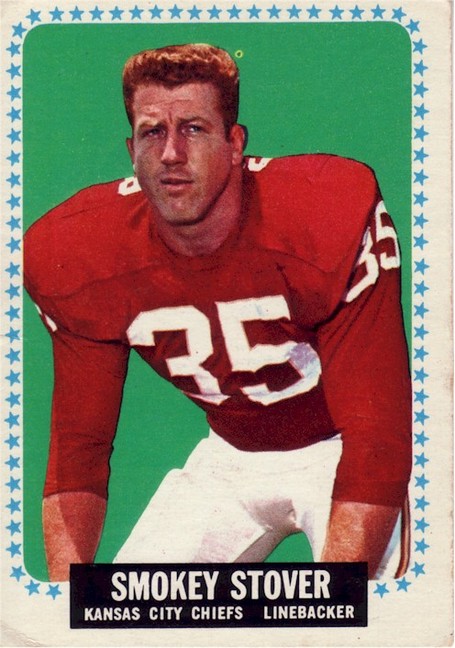 Wikipedia has this one for you:

Stewart Lynn "Smokey" Stover (born August 24, 1938) is a former American college fullback and professional football linebacker who was a school Hall of Fame fullback at the University of Louisiana at Monroe. When he was signed in 1960 as an original Dallas Texan in the American Football League, head coach Hank Stram converted him to a top linebacker with excellent reflexes. He played for the Texans in their classic double-overtime victory over the two-time defending AFL Champion Houston Oilers in 1962, and for the Kansas City Chiefs when they won the 1966 AFL title, once again over a two-time defending AFL Champion, this time the Buffalo Bills, and played in the first AFL-NFL World Championship game. After leaving the Chiefs following the 1966 AFL season, Stover played for the Canadian Football League's Hamilton Tiger-Cats, winning the Grey Cup with them in 1967.

Stover had seven INTs for the Chiefs in his career.

Thomas was a seventh round pick by the Chiefs in 1983. He played one NFL season, accumulating 236 yards receiving and 55 yards rushing. He scored one touchdown in his one NFL season.

Drafted by the Lions in the fourth round of the 1988 draft, White was a long-time Lion before becoming a Chief and then a Falcon for his final two NFL seasons. White started 20 of the 43 games he appeared in in KC, snagging four INTs and making 101 tackles.

Let the debate begin! Who is the greatest Chief to wear #35?