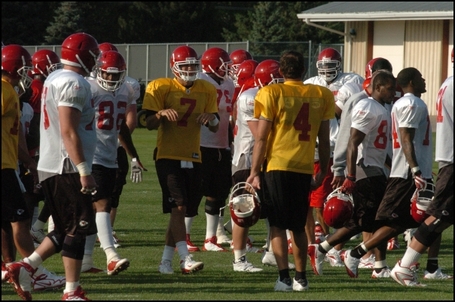 From the FanPosts. Added the image.  -Joel

In an effort to avoid my third auto-ban due to number of Fanshots, I am putting them all into one Fanpost. Enjoy.

She stands in front of her son’s grave, at the bottom corner of an open-air mausoleum in South Florida. Sometimes she speaks to him, sharing stories about holidays and family business and his children. But always, before she leaves, Edith touches the oval photograph of Derrick Thomas, No. 58 for the Kansas City Chiefs.

Finally, Hall of Fame arrives for Derrick Thomas From the KC Star

Waters admitted during minicamp that he wasn’t in football shape, saying that he believes in putting the "off" in offseason. Waters will get his chance today to prove his conditioning level during Haley’s test, which is expected to be similar to the brutal exercise the Chiefs endured at the end of offseason drills.

Is Kansas City Coach Todd Haley all about passing? You wouldn't think that if you looked at the care package he recently got from his mom.

In it were a collection of plays he drew up as a kid, mostly classroom doodles, when his dad, Dick Haley, was assembling those great Pittsburgh Steelers teams of the 1970 as their director of player personnel.

As the original American Football League clubs celebrate their 50th anniversary this season, the Examiner.com writers who cover their modern-day NFL counterparts have been asked to select an "All-50" roster for our particular team. This is my latest entry into the series of articles.

Kansas City Chiefs All-50 team: defensive line From The Examiner

"Then he went over and Gary Clark was coming off the field and he tried to get him to stop and sign something and Clark just blew right past him.

"I’ve always remembered that happening and that’s why I try to sign for everybody, no matter how long it takes. I don’t want some kid to be standing there feeling like me and my brother did that day."

Such is the other side of L.J. that frequently is forgotten with his antics off the field, his angry comments or his frowning demeanor.

Besides running back Jamaal Charles and rookie wide receiver Quinten Lawrence the Chiefs have no speedy game breakers on their offense.

Which brings me to my main question why is a former first overall pick of the 2001 NFL Draft, three time pro bowler with 4.3 speed and the ability to throw the football out of the stadium still sitting on the free agent market?

And now your playersTwitter Updates:

dbowe82Me and Lil bro London. Killed it dis mourning. I'll update you all whenever I get a chance.

superdj56sitting here iceing my legs b4 i go to bed...hard good day of practice.

spidermonkey25: Pretty sure I saw half of the KC Chiefs team at Target. Too bad I don't care.