One Veteran Free Agent Not on the Chiefs Radar

Share All sharing options for: One Veteran Free Agent Not on the Chiefs Radar 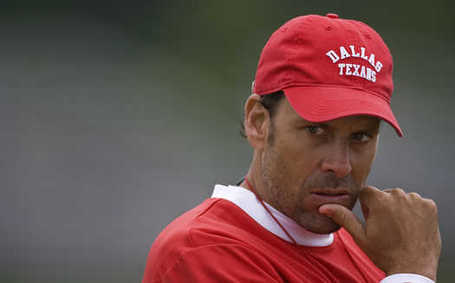 Who do you think of when I say veteran free agent?

Yes, yes and yes.  But the name that pops up around here most frequently is former Cincinnati Bengals T Levi Jones.  He was a left tackle during his time in the jungle but there was hope that he could make the switch to the right side to help fill I-77.

For now, that's not happening according to Bill Williamson of ESPN (thanks to stagsdp in the FanShots)

I checked into this question and, thus far, no the Chiefs are not pursuing the veteran. He is waiting for a good opportunity to arise. If the Chiefs get uncomfortable or suffer an injury, maybe Jones could be in the mix. But he is not in the team's plans as of now.

Jones is only 29 (he'll turn 30 next week) and has had some definite durability issues in the last three seasons where he's started 10, 13 and 5 games.  As I've done before, I'm going to defer to the talent evaluators on this team who apparently believe injury issues with linemen don't get better on the other side of 30.

So, in our search for the 3-5 players Scott Pioli says the Chiefs could add, we can scratch off Levi Jones as an option.

I'll go back to scouring the waiver wire for former Patriots.