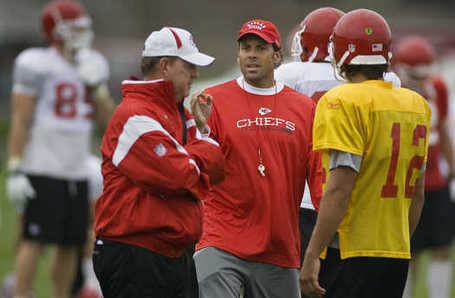 No, no I wasn't serious! Matt's the guy. (Photo via KC Star)

Update: Here is the full transcript and video of Haley's Q&A

Oh, you heard that already?  Yeah, that's been the word coming from Todd Haley the day he was hired.

But the hubbub as of late is over a non-answer.  Asked if Matt Cassel was the best quarterback in camp, Haley said, "I'm going to hold out on answering that."

So?  Haley is quickly becoming schooled in the art of the non-answer.

But this one was a little different because it was followed up by a tweet from Kent Babb of the Kansas City Star of Brodie Croyle possibly placing himself in position to threaten Cassel's job.  So, the topic of competition was brought up again at today's media session following the morning practice.

"Again, every spot is open right now.  Every spot is an open competition. Some are getting closer to being filled and some are not close at all. So I’m not going to refer to answer that as far as him being the starter. I think Matt is getting more and more comfortable with what we are doing out there."

Which is true but ignores every other opportunity Haley has jumped on to praise Cassel.  Maybe it's just strange timing with Haley's quote and Babb's speculation.

"You can make out of that what you want.  What I have told this team is that every spot is open and I’m going to stay true to my word. We’re going to evaluate every spot and these guys that give us the best chance to win on Opening Day will be in the lineup."

I understand the open competition rhetoric but until someone other than Cassel take a full day of first team reps it's his job to lose.