Share All sharing options for: On Speculation, Jets, Wide Receivers and Dwayne Bowe 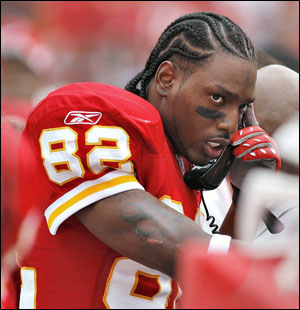 Hello, players club?  Oh, I'm sorry, I must have the wrong number. (Photo via Photo Source)

It's funny how a simple bit of speculation by a sports reporter can cause such an uproar.  Yesterday, Kent Babb of the Kansas City Star tweeted his thought that Brodie Croyle might be pushing Matt Cassel for the first team job.  A bit of a surprise, no?

Judging by the reaction, it is a surprise and most of us would disagree with Babb's speculation (even though we haven't been at camp).

Now, Mr. Babb didn't put this in a newspaper column which, to me, indicates that this is just a passing thought with no real legs to go on.  Just an observation or a feeling of sorts.  If he felt strongly about it, there's no doubt we'd be reading a column in the Star this morning.  And that's fine.  Isn't that part of the point of Twitter?

The newest bit of speculation (via Bestofthewest in the FanShots), that I imagine will make its rounds in the NFL world today, is a piece by Rich Cimini of the NY Daily News.  In a column discussing the New York Jets options for acquiring a wide receiver, Cimini says this:

Another name to watch is the Chiefs' Dwayne Bowe, a former first-round pick. He caught 86 balls for 1,022yards on an awful team last season, but he's had a difficult transition under new coach Todd Haley. He may have played his way out of the doghouse with five catches in the preseason opener, but the Chiefs are rebuilding and will move a player if he doesn't fit their long-term plans.

Now, I understand how Cimini got to this point.  Hard-nosed coach/GM + Player that doesn't fit the NE mold = trade bait.  And all the points he makes are true.

It makes sense on some level, doesn't it?

Cimini also floats the name of Chiefs receiver Dwayne Bowe as a possible target, but we can't imagine Kansas City trading one of their only quality players -- cough . . . Tony Gonzalez . . . cough.

Two completely different situations if you ask me.

Trading Dwayne Bowe right now would, quite simply, be a team killing move in my humble, non-football executive opinion. For some players, he's the life of the team.  A breath of fresh air in a Haley-controlled environment.

For those of you that follow the Chiefs on a daily basis, you understand how far out there this speculation appears.  I understand how Cimini reached the conclusion that Bowe might be on the market.  GM Scott Pioli says they listen to any offer for any player (take that Josh McDaniels!).
Besides, if the Chiefs had ever been interested in trading Bowe, don't you think we would get at least one result for "Chiefs trade Dwayne Bowe" on a Google search?