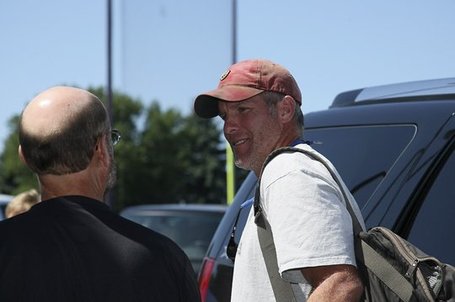 You're telling me this dome is carpet and it doesn't even hurt when I fall?  (Photo via VIkings)

Since everyone else is talking about him....

Kansas City Chiefs head coach Todd Haley and several Chiefs players reacted today to the development that Brett Favre has indeed agreed to a contract with the Minnesota Vikings.  Yes, it was actually signed and he was in a purple practice uniform this afternoon.

The Chiefs are expected to get the first crack at Favre on Friday night if the reports are accurate that he'll "definitely" be the starter.

Haley commented on his history with Favre:

"He’s one of the great players of all time.  We went up there to the Meadowlands last year and he probably had one of his better games in a long time against us.

So I don’t have fond memories of Brett Favre. He’s one of the great quarterbacks of all time."

That game in the Meadowlands last year?  Favre completed over 70% of his passes and had SIX touchdown passes.

More reaction from players after the jump.  These quotes are coming from Josh Looney, Bob Gretz and the UWRF staff.

He recorded his first career interception against Favre in a week eight loss to the Jets.  Here's what he said about Favre:

And Saturday's loss caused the defense to "step it up a notch" according to Flowers.

Favre faced Vrabel's defense twice last season completing over 69% of his passes in both games and totaling three TDs and one INT.  The teams split wins.

"It would be a distraction here for someone to show up in the middle of camp. That’s not what we’re looking for here.

"He always puts his team in a position to win."

Vrabel noted that he was a good competitor.

Pollard didn't find out about the Vikings new addition until just before practice started.

"Favre always throws in the tight spots on the field, and Minnesota is getting a great player."

He said having Favre in the NFL isn't a distraction.

2more days of camp! and had to end it with this Brett Favre Mess!!!!!! This will be the funniest game.