A Favre Update...But With a Chiefs Twist

Share All sharing options for: A Favre Update...But With a Chiefs Twist 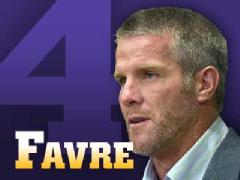 Don't shoot me for bringing up Brett Favre just yet.  This one has a slight Chiefs twist to it.

According to the Hattiesburg Laurel Regional Airport (via WISN), Favre and his wife Deanna have boarded a plane, with a Vikings logo, headed to Minnesota.

Mike Florio of Pro Football Talk brought light to some rumors (Favre and rumors?  No!) that Vikings owner Zygi Wilf was sending his private jet to Hattiesburg to collect Favre.

Jay Glazer is reporting, via Twitter, that the deal will be done by tonight.

If that's the case, Favre could be introduced to Minnesota at Friday's preseason home opener against our Kansas City Chiefs.

If that's the case, then you can forget about any national coverage of, you know, the Chiefs playing in that game.

Update: The Star-Tribune in Minneapolis cites sources that say Favre will start against the Chiefs on Friday night.