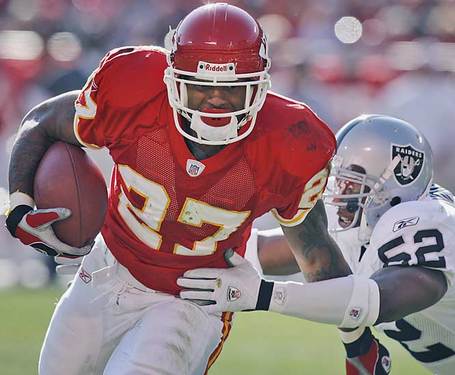 The Kansas City Chiefs will face the Oakland Raiders for the second time in the 2009 season on November 15th in what will hopefully be the final game of a series sweep for the Chiefs.  The teams face off prior to this in week two, where we predicted a 20-17 Chiefs victory.

This game has the potential to be much more difficult than week because of one major factor (that I think will come to fruition at this point): Jeff Garcia replacing JaMarcus Russell.

Yes, Russell played better down the stretch in 2008 but Garcia, despite his recent lack of participation in camp, has been adamant that his plans for 2009 don't include riding the pine all season.  As a Chiefs fan, the insertion of Garcia into the starting line-up would not be a good thing.

Below, I take a look at a few of the aspects of the game I think will be important.  I'll end with a prediction (Hint: Good outcome for Chiefs fans).

Both teams coming off a bye week

The Raiders, like the Chiefs, will be coming off a bye-week in the November 15th match up, which means more preparation and time to heal injuries.  This is a good thing for the team by the Bay, right?

Wrong.  You have to go back to the Raiders 2002 Super Bowl season for the last time they won coming off of a bye week.

The Chiefs haven't been much better, though. They last won off of a bye week in 2006 but their 2007 loss to the Packers following a bye week kicked off a string of nine straight losses to end the season.  In 2008, an early bye week didn't help them being destroyed by the Titans 34-10.

As bad as both teams were in 2008, they were able to stay in the black when it came to turnovers.  The Raiders were +1 which was good enough for 15th in the NFL.  The Chiefs, meanwhile, were +5 which put them at 8th in the NFL.

For the Chiefs, it's more likely that number will revert back to the statistical average.  Martin Manley at Upon Further Review argued that the Chiefs' turnover ratio was a fluke and what's more likely to happen next year is reverting to the mean which means the Chiefs won't be in as many games as they were in 2008 due to the good fortune of interceptions and fumbles.

The wildcard here is the new defense.  We have no idea how bad, or how good, the 2009 version of the Chiefs defense will be.

The quarterback likely won't win this game for the Raiders.  For all the ineptitude in Oakland, they've got three pretty good running backs in Justin Fargas, Darren McFadden and Michael Bush.  Those three helped the Raiders finish 10th in the NFL in yards per attempt.  Not bad, especially when you consider that JaMarcus Russell was a threat to no one to pass the ball.

The Chiefs, on the other hand, couldn't stop the run all year.  They finished 31st in yards per attempt.

Again, the wildcard is the 3-4 defense.  We just don't know how advanced it will be this year.

The Raiders quarterback as of now and likely game one of the regular season is Russell.  He ended the season well completing over 66% of his passes in five of the final seven regular season games.  That's not a bad set of stats but the reality is that the sample size wasn't that big for each game.  His pass attempts in those five games of over 66%: 22, 11, 13, 25 and 21.

Even though both teams will be coming off of a bye week, the Raiders could be on the downswing with four consecutive games against .500 or better teams:   Giants, Eagles, Jets and Chargers.

The Chiefs, meanwhile, will be coming off of a difficult, but not impossible, four game stretch: Cowboys, Redskins, Chargers and Jaguars.

Again, the Chiefs schedule isn't much easier, but we've got the tamer of the two NFC East teams.

The Chiefs defense is coming around and shows why they switched to the 3-4 with pressure on Russell/Garcia all day.