Summary of What Kansas City Chiefs Players Haven't Been Practicing

Share All sharing options for: Summary of What Kansas City Chiefs Players Haven't Been Practicing

This afternoon at 2 PM (Arrowhead time), the Kansas City Chiefs take the field for the 21st of their 24 training camp practices in River Falls, WI.

What's that you say? Camp ends on Thursday?

Indeed, fellow Chiefs fan. My how quickly how it has gone. The team will be back practicing in Kansas City in no time.

And to throw some more dates at you, here are the 2009 NFL roster cutdown dates:

That's five players (down from 80) gone by two weeks from today. A total of 17 27 Chiefs will be cut just a few days later. And the NFL regular season begins the next week after that. Wow.

So, we'll do this injury summary again at the end of the week in our training camp summary, but now let's have a quick refresher on who's missed time during the Chiefs' 20 practices and why. I know even I forget things about camp here and there with so many updates coming out so I like doing updates like this when I can.

Head coach Todd Haley has repeatedly mentioned that he's sitting certain guys, especially veterans, because they need a bit more rest than the younger guys. Others have had nagging injuries and others have sat more almost all 20 practices.

After the jump, the skinny on who's been missing practice in River Falls in a, if I do say so myself, sweet looking chart graphic. 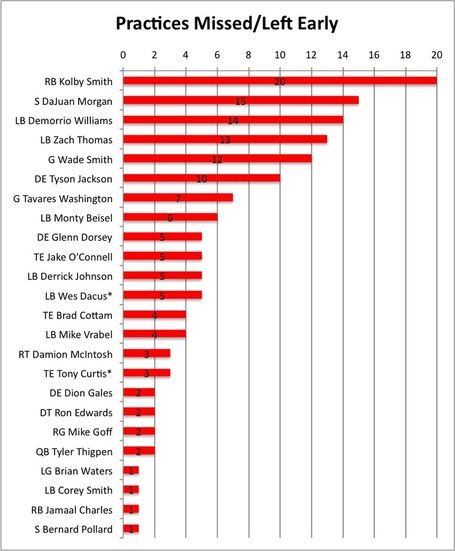 * Wes Dacus and Tony Curtis have been cut

It is my opinion that DaJuan Morgan has missed too much time to earn a spot on the 53-man roster. Kolby Smith will likely miss the first six games of the regular season because he will be on the PUP list (league rules) and then who knows what will happen after that. If Demorrio Williams remains healthy, he'll probably have to earn a roster spot on special teams. Zach Thomas will most definitely make the team and his lack of practicing seems to be injury/veteran rest related. I'm not sure what's up with Wade Smith. He just recently started practicing.

The Chiefs' injury situation has been pretty good this off season. Last season, for Week 1, the Chiefs only listed LB Nap Harris, WR Will Franklin and the injured WR Maurice Price as out with injuries after suffering lots of dings during camp.

Two more guesses on cuts are G Tavares Washington, who's missing practices right now and oh is that a bad thing. And I also think that TE Jake O'Connell may end up losing his roster spot because of missed time early on.

Thoughts on who may lose their job because of a lack of practice?