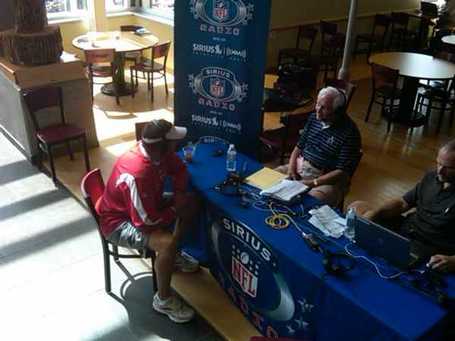 I missed the live segment of Kansas City Chiefs head coach Todd Haley's session with the Gil Brandt and Vic Carucci on Sirius NFL Radio.  I'm a fan of the guys on channel 124, which is why it was a nice surprise to see Haley's full interview posted on the Mothership.

Saskwatch gave a nice run down of everyone interviewed and other parts of the two hour stop in River Falls.  Definitely check that out.

Below are Haley's words transcribed.  Click here to listen to the audio.

How hard is it to hire a staff knowing they can teach together?

Well, that's the toughest part of the job.  Early on, especially the time of year I got hired being late, really the last hire.  Really, I was worried about that.  But the way things fell I am very excited about the guys I was able to get on staff and a couple of guys I could keep.  But the way it worked out for me, as late as it was, was terrific as far as I can tell.

To get a Bill Muir to coach the line, which is obviously a critical, critical spot.  To get Maurice Carthon here, who I've been with for a bunch years, he has a huge impact on any team he's around.  Gary Gibbs, former head coach.

And Clancy, who I had some familiarity with in Arizona, I mean for him to come free when it did it all kinda just fell in place.

Why the discipline, zero-tolerance approach this camp?

Well, I've obviously been around coach Parcells a long time and something that he always stressed to me was the offseason program.  You know, getting these guys in shape ahead of time, not waiting until training camp to get them in shape.

That's something that was always impressed upon me and I saw the effects that it had when we had a well conditioned team.  So, that was the first thing I tried to set out to do and we lost 760 something pounds. That should be a one time shot.  That shouldn't happen again.

That was the first priority.  Just the overall discipline and the way things that I've been around with the teams that have had success how they've been run.  There's a lot of different ways to do it but that's the way I believe is the best way to get it done.

Only one player had to run today.  How much of a drop is that since day one? 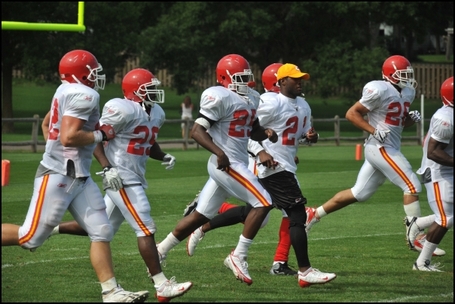 I think it's been a big drop.  Now we have guys that when they flinch or jump offsides they just get up and run on their own so that's a good sign.  But practice has been much better than the game, where I don't think we were quite as good so we have to continue working on that, going from practice to the game.  We're making progress.

What did you expect of your first outing as a head coach and what did you see on the correction/improvement side?

Being the first time, there's so many things that I wasn't even expecting or knew even occurred.  So many of the little things that happen leading up to the game so there was a laundry list of things that I had to do that were new to me.

Really, on that first one, I wanted to be organized, or appear organized, whether it was pregame warm-up or in between halves.  There's a lot of things you're worried about and you want to be organized and know what's going on - have 11 guys on the field at the beginning of each snap and then special teams can be a little bit of a fire drill in preseason.

I thought overall we did a decent job at that, personnel wise.  Then from there it was trying to start to establish an identity of what this team is going to be and what I want to be and first and foremost that's a tough team that plays fairly smart.

So those were my expectations of that first one.  We tried to run the ball a little bit, some with success and some with not so much success. We just gotta continue to work, and we're back to work today with the two-a-days with the pads, and be in the frame of mind that we want. 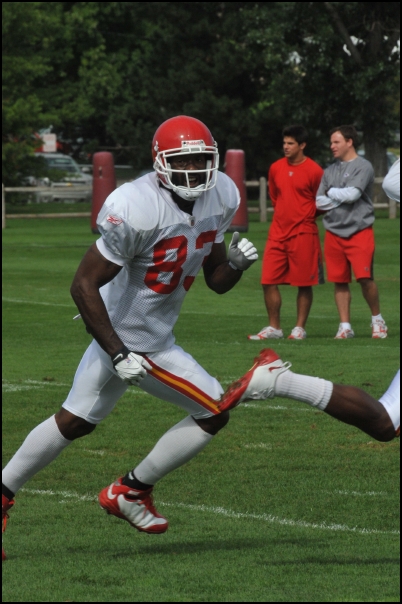 You were on the WRs constantly as a position coach.  How hard is it to make the transition to head coach?

That's hard.  I'm not always successful at that. But I think in this first game...you know, I told my father the other night the only thing I didnt' want was a blow up or anything like that.

It's hard but at the same time I know where I'm at and I know this is a new role that I have and I can't be a distraction to the coaches.  At the same time I have to push the players as best I can to keep things running the way they need to run.  Overall, that's a big adjustment for me.

Changes all over the place.  How are the new components, like Matt Cassel, coming together?  Is it a process?

That's the right word for it, process.  It is a process and you gotta keep reminding myself, Matt and the other guys that it's not year ten or nine in New England or year three in Arizona.

It's year one in Kansas City.  It's a process.  Change is hard.  Whether it's guys that have been here that now have to do it a different way or guys that are coming from another place like me relocating with all new people around.  Change is difficult and it is a process and that's what it is.

It is a process that we're working through and that's why you develop a routine and understanding of what's expected. I think if you do that and stick to it that you have a chance to get better and succeed.

Are the veteran players part of the process?

Without a doubt.  Scott and I did a lot of work on the types of players that we do bring in and how they'll fit and they still had to be able to play but at the same time they had to have enough experience and confidence to teach and help some of these young guys to do it.

I think that just helps accelerate it.  A player showing somebody [something] is worth its weight in gold as opposed to just talking about it or coaching it all the time.

How is the process going with the conversion to the 3-4 defense?

I would say I'm encouraged overall by how guys are transitioning, specifically a guy like Tamba who's looking more and more comfortable every day and has some definite ability to rush the passer.

But having Clancy here, someone who's coached 3-4 and some hybrid 3-4, ones that aren't the traditional 3-4 that you're used to but a little more under and with both backers standing up, which I think will help us transition.  Drafting the guys we drafted, [like] bringing in Mike Vrabel who's played in the defense a long time and can help some guys along.

I would say I'm encouraged.  And the other night I would say we did some things fairly well.

What did you do to convince Brian Waters to convince him to say because he looked like he was working hard today?

I talked about him when we broke practice that I want more guys that handle their business like he does.

Hey, I'm just laying it out there of what's expected and then seeing who wants to do it.  Trying to be fairly consistent, not treating every guy the same, but treating them the way they deserve to be treated by what they're giving back.

I'm just trying to do what I've always done and if guys want to buy in and be part of special then I welcome them all.

You seem to use a lot of energy during practice.  Can you sustain that? 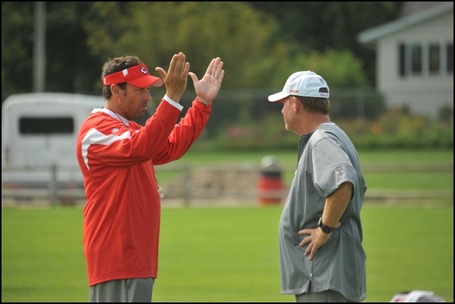 That's what vacation is for.  That's why when I took the job I said, Scott this vacation of mine can't change because I have to recharge. Last year was a hard yard, long, fun great year.  Best year of my life like I said but it required a lot of energy both on and off the field.

And when you get to that summertime you need a little downtime with the kids.  But now, I'm ready to go.

You need a blow horn like Landry used to have.

So far I've been blessed with decent vocal chords.

On the progress of Dwayne Bowe:

He's making progress.  Last couple days before the game I thought Dwayne started to show up the way you'd expect him to.  Then in the game he made some plays.

I've coached recievers a long time and I think of these guys not as receivers but football players.  They're not just pass catchers. They have to do it all.

In the run game, there were a couple suspect things that have to prove because while he's making plays in the pass game there are other guys blocking and getting hit in the mouth so he can do that.   It wasn't perfect but I'm encouraged by his progress here in the last week or so.

On what he saw in Ashley Lelie:

A guy that's had some opportunity and hasn't probably made the most of it all the time.  He appears very hungry to come in and show what he's about and how he's matured as a football and a player so I'm excited to see how he comes along.