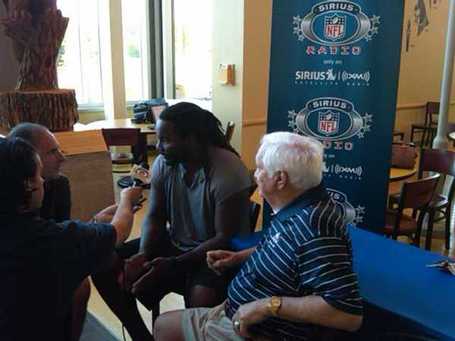 The Sirius NFL Radio Training Camp tour stopped at River Falls today to broadcast live from Chiefs camp. The hosts were Vic Carrucci (NFL Writer) and Gil Brandt (one of the pioneers of the NFL personel and player evaluation).

I realize that many of the readers here at AP do not have access to Sirius XM, and usually there is a lot of good information. This is not meant to be a full transcript of the radio show, and is basically my interpretation of the shows highlights and interesting portions. I will miss some stuff and may interpret things different than somebody else who will have listened, but hopefully it gives people who couldn't listen a idea of hat was talked about on the show. It is a little scattered, but hopefully you find it interesting.

The highlights are after the jump.

Vic Carrucci and Gil Brandt attended the practice this morning prior to the broadcast.

General Impressions of the Chiefs by Carrucci and Brandt-

Brandt feels that the emphasis on discipline, conditioning, and the physical nature of camp will allow the chiefs to be much more prepared for the first few weeks of the regular season. He felt we would start the season very prepared and competitive.

They are starting to see Pioli's vision starting to take place. He is working to change the culture of the team form the scouts all the way down to the players.

Asked whether he thought the players would buy into the new approach, Brant replied that buying in comes with wins. Players will buy in if they see results otherwise it is difficult.

Brandt thinks that the Chiefs have drafted well the past few years and believes it will start to pay dividends. Should start to take steps ahead, and could do it this year especially because of the uncertainty in Oak and Den.

Gil expressed his dissappointment that the Chiefs next year will be joining the trend of moving training camp away from small remote colleges to there own facility. Feels it was one of the great traditions of the NFL.

He is lighter than he ever has been and that it has made him quicker and more explosive. Said it should help in change of direction, burst, and being able to finish the long runs without getting caught from behind.

Major difference in this camp to previous years is emphasis on conditioning and weight reduction.

Blocking scheme is pretty much the same with a few more wrinkles and run options.

He excited about Cassel and WR additions and the hopefully the passing game can move defenders away from the line so he is not running against 8 in the box all the time.

Besides winning a major goal is to try and break the Chiefs all-time rushing record.

Likes the veteran prescence of many of the old guys this year. Hopes to be a leader.

He had mixed feelings when Gonzalez was traded. Said he was a great teacher, but realizedit would give him an opportunity.

Still doesn't know how much of a role the TE's will play in the offense.

Brandt said Haley had left him with the impression that the TE will be more involved than people think.

Cottam feels Cassel has done a good job of running offense and understands offense very well and makes sure everyone is in the right place and that the o-line continues to improve.

Starting to feel a lot better, and has been cautious but wants to be ready for the start of the season.

Excited about the scheme. Feels he is a much better fit at the middle than ILB were he played in Dallas. Feels LB are more protected in the 3-4 and it allows LB to make plays.

Had great opportunity to learn from Belicheck and Parcells and a lot of great people.

The preseason game was a little different because he was paying attention to a lot of the non-football things than previously with the Pats (stuff like how many people are allowed on the sidelines and general stadium operations).

A lot of things need to change to get were we want to be. Have to be realistic about expectations of young players, and especially with young defensive linemen. Excited about Tyson Jackson's ability and he will help the Chiefs run the scheme they want.

No rookies have jumped out, and all the rookies look a little overwhelmed. Some young guys not well known have done a solid job, singled out Quinton Lawrence and Javon Belcher.

Went with one Kicker because there was no roster exemption for NFL Europe and needed the roster spot, but made it clear to Succop that he has not yet won the job. They can bring in someone if they need to replace him.

Dwayne Bowe had a slow start to camp and did do a nice job in the game, but they are trying to impress on players that you don't win with the most talented players but with the best team and group of guys that work together the best. They want players doing the right things in practice and in the game.

Doesn't know impact the impact that Ashley Lelie will have, but he is going to come out and compete. Need to try and upgrade every position and create competition and depth at every position.

It can be a d ifficult adjustment from the 4-3 to 3-4. Tamba has done a good job, and doing a good job at rushing passer. Turk is working hard. Both of these guys are buying in to the process.

Vrabel one of the brightest players he has every been around and is a very good teacher.

Think Cassel is the guy, but he has to earn his job. The best QB will play.

Still finding comfort level with the change to a new team.

Not much changes from being a backup to the starter, still prepare the same, works hard on and off the field. Big change is the leadership role, he watched Tom and learned how important it is to lead an offense. Beinga starter there a few more demands away from the football field.

Interseting receiver group. Nobody has locked up any position. Signing Lelie adds more competition. Coaches are really pushing all these players.

Lost 35 pounds. Transition has been difficult but they expect the o-line to continue to grow.

The greatest change in emphasis is to be lighter, quicker. Get the tempo up and put pressure on defense.

The toughest part so far was hiring a coaching staff, but as it turned out very excited about staff he was able to assemble.

he learned form Parcells how important it is to get them in shape in the offseason, the team has lost 760 pounds. Overall discipline is important to be successful. Making progress.

There was a lot of things that came up in the first game that he never had to deal with before as an assistant. Just trying to be organized and establish an identity as tough team that plays smart.

Overall encouraged about the transition of players like Tamba towards the change from 4-3 to 3-4.

Dwayne Bowe is making progress, starting a couple of days before game and at the game. Encourged by progress in the last couple of weeks.

Lelie is a different reciever type long lean fast, hasn't always made the most of his opportunity but seems hungry.

Enjoyed preseason game and getting to hit other guys but has lots to learn and improve.

Hand work has been the most important thing to learn.

Feels he fell in perfect situation, clean slate and and chance to learn new scheme with everyone. Excited about the attacking scheme that Pendergast brings.

Overall Haley has handled camp very well. Tight ship and everyone seems to be responding.

Loves the new defense. Lining up all over the field in different positions and will get the opportunity to be a great player and allow opprtunity to be unpredictable and create turnovers.

Vrabel has really been helping Tamba.

Felt that team was more prepared physically for the game last week than previous years but still learning mental aspect with all the changes. Hardest camp he has been involved in and everyone is working really hard.

Larry looks great and Matt Cassel is a perfectionist and has impressed him with how he knows the game and how hard he works.

Excited to be here, working hard after to try and get in football shape.