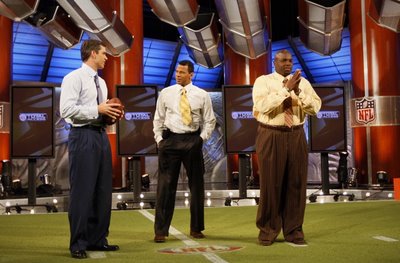 A few weeks ago, former Kansas City Chiefs QB Trent Green said he had decided on a post-playing career in television.  His initial assignment was last weekend's game between the Jets and Rams broadcast on the local FOX affiliate.

At the time, he had hoped to officially choose a network within a week or so.  Nearly a month later, the verdict is in.  Drum roll....

Trent Green will partner with Chris Myers on FOX Sports Sundays this fall.

His first assignment will be week one in Louisiana when the Detroit Lions visit the New Orleans Saints.

Update: This was actually first announced at the tail end of last week by Jim Thomas of the St. Louis Post-Dispatch.

Once the regular-season begins, Green will go network, serving as color analyst for seven FOX regional games, beginning with the Detroit-New Orleans contest in Week 1.

I’m doing the first three with Chris Myers, and the next four with Chris Rose,” Green said. “I’ve got the Green Bay game here (against the Rams) in Week 3.”

Randy Covtiz of the Kansas City Star initially alerted us to the development. Green, who retired after a 14-year career following the 2008 season with St. Louis, joins John Lynch and Charles Davis as part of FOX's seven NFL crews," Covitz writes.

Click here to see the full FOX line up courtesy of Covitz.

Okay, now back to your regularly scheduled training camp coverage...