Five Chiefs Who Helped Themselves in Saturday's Loss to the Texans

Share All sharing options for: Five Chiefs Who Helped Themselves in Saturday's Loss to the Texans

We've had a few variations of this post. ChiefDJ graded the Chiefs position groups and I already know he'll disagree with one of my honorable mentions. Direckshun handed out a Studs, Duds and Scrubs list.

Check those out then take a look at my take on the Kansas City Chiefs first preseason game against the Houston Texans.

"This is going to be his best scheme. It's definitely weakside linebacker-friendly. It can exploit the talent that he has.

"Everybody knows how talented and fast he is. If he gets this down where he's not thinking, just rolling around and just having fun and he knows what to do, he'll be a great player in this scheme." -Zach Thomas on Derrick Johnson

Thomas is right. He just looks faster. On a few plays he came in hot pursuit and really wrapped up well. This defense fits him much better.

He led the team with six tackles and Zach Thomas' words that this will be DJ's best defense is beginning to come to fruition. 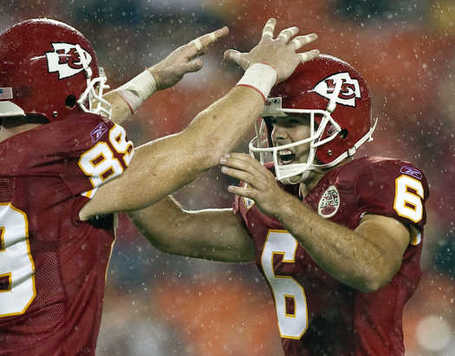 Wouldn't it just make Haley's day if Succop pans out and the Chiefs have a solid kicker and one of the best punters in the NFL?

47 yards in the rain on Saturday night is a good beginning for Succop. He still has 16 "real" games to go but that kick was a nice start. Leg strength is so important because it shortens the field even more for the offense to create scoring opportunities.

And for an offense with an average starting position inside their own 25, those few extra yards in range will be important.

Lawrence didn't define himself in the return game but he did do one thing as a receiver that Todd Haley likes - block. Josh Looney breaks down the block I'm talking about:

WR Quinten Lawrence logged one of the biggest hits of the day when he laid a crushing block on a Texans defensive back attempting to tackle a scrambling QB Tyler Thigpen. Lawrence broke off his route when he saw Thigpen scramble and laid an ear-hole block downfield that sprung Thigpen for another seven yards near the goal line. These are the type of plays that Haley wants to see his receivers make.

Chiefs Planet has a nice video of the block.

After the game, Lawrence told me the block was just part of the job. He didn't stand out in other phases of the game but no one else did either. Doing the little things will help make an impression.

Seriously. He had an excellent game considering the expectations weren't high. He hit his receivers most of the time (nearly 70% completion) and he really whipped it in there. He's got a heck of an arm.

It's just a matter of keeping it on the field for the entire season. After tonight, I don't feel too bad about Croyle having to spell the starting QB for a game or two. Judging by past history, it would be difficult to count on him for more than just a couple of spot starts. 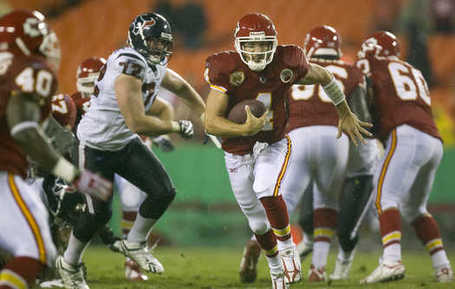 One local sports reporter recently said there's a chance Thigpen might not make the team. His performance Saturday night was good but it was a familiar result. He was the spark in the offense and led the only scoring drive. But...

He threw the interception that sealed the game.

His legs are an asset, which is why I think he'll make the team and his performance in the Texans game showed that.

Thigpen's efforts to force a regular role for himself in the offense will be the most interesting story line to develop in the preseason and early part of the regular season. 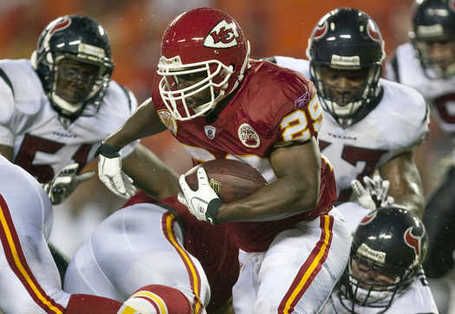 He took the bulk of the rushing duties in the second half. Nearly 40 yards and about five yards per carry is a good day's work in limited action.

It's tough to forget about the two fumbles, one of which was lost. Savage seemed to play a pretty good game overall but if there's one thing that will get you on Haley's bad side, it's turnovers.

Kent Babb had a nice piece on Mays earlier in the week. On Saturday he was the second leading tackler.

He played well in limited action but, most importantly, the Chiefs need linebackers and Mays' stepping up gives him a very good chance to not only make the team, but contribute.