We're still figuring out exactly how we're going to cover the Chiefs with Arrowhead Pride's seat in the press box but we've got the basic idea down.

Among other things, we essentially want to bring to you what you didn't see on TV.  That may come in the form of some quotes from the locker room after the game or some notes on what various players and/or coaches were doing on the sidelines during the game.

I took some notes on what I saw and put them below.  There's really no rhythm to these.  It was just a few different things I saw throughout the night that I found interesting.

Once we get the hang of this, I hope this is one of the more interesting posts to come out of Arrowhead Pride's seat in the press box.  The idea is to place you all in the seat next to me and help you see what I see.  Hope you enjoy it.

As I settle into my seat, just to my right there are some folks from the NFL cutting up film of the game.  Just a quick glimpse of their computer screens helps explain why NFL Films is continually on the leading edge of the sports coverage industry.  This has got to be one of the best jobs out there.  Travel to different stadiums, watch football, and break it down in real time on film.  It's even cooler when you know how incredibly well the final product turns out. 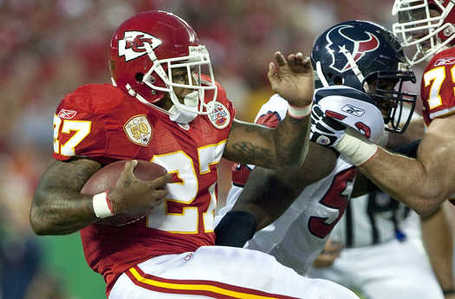 LJ only played a couple of series but it's becoming clear to me that the theme from last year still rings true today - spread the offense.  The line's not going to be mauling anyone this year so making holes for LJ becomes much more strategic than line-up-and-run-you-over.

He spent a lot of time at the end of the sidelines by himself.  He definitely comes across as a loner but one I wouldn't want to face in the open field.

Haley and the receivers

When the first team offense comes off, and the defense takes the field, Todd Haley has been going back to the bench and talking to the offensive players.  I'm not sure he saw much of the Chiefs defense in the first quarter.  He was right next to the receivers most of the time.  But that's what the tape is for and the team reviewed that last night.

Either he's having trouble taking his focus off of the wide receivers (since he's a former WRs coach) or he's putting a lot of faith into his coordinators.

I talked to Quinten Lawrence after the game and he said Haley instills the idea of being a complete receiver to each of them every day.

Krumrie getting after it

If you've ever been to a game and looked at the sidelines, then you know what I'm talking about when I say this - Tim Krumrie is the most intense coach on the field.  Seriously.  The "intense" description has been applied to Haley plenty the last few months but Krumrie is going 100% at all times.

Mental note: At some point, try to hear Tim Krumrie speak after a game.

I bet his voice is shot after nearly three hours of this.

A nice play from Tamba Hali in the red zone.  On a key third down in the red zone, he knocked down a pass in coverage.  That fired up the sidelines and a lot of players were congratulating him coming off the field.

We all had (and still have) our reservations about Tamba Hali.  But In just a few defensive sets for Hali, it’s very obvious he’s been emphasizing tackling and tackling hard.  He was a nice early surprise.

Not much has changed with Thigpen 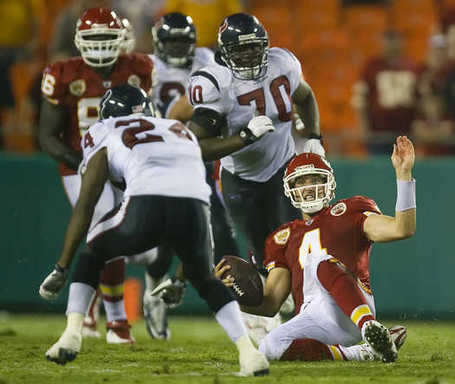 He's still the most exciting part of the offense.  I heard a few folks around me wondering why Thigpen shouldn't be the guy.  He makes things happen.

31 yards rushing in under a quarter of work.  That's a huge weapon and I think it'd be a shame if the Chiefs ignored it (which is why I think Thigpen will make the team).

At the same time, he threw the interception that all but ended the game.  The highs are high and the lows are low.

In the second quarter, Mike Brown was talking to the starting secondary while the Chiefs offense was on the field.  The safeties, Bernard Pollard and Jarrad Page, and the cornerbacks, Brandon Flowers and Brandon Carr, were sitting on the bench and Brown stood over them and talked for a couple of minutes.

I was in on Pollard's conversation in the locker room where he cited Brown's leadership and talked about competing with him every day for the rest of the season.

Some folks were wondering whether Brown would take the starting job from Pollard.  That's a situation that could create some animosity but if that's the case, neither are showing it.

Warming up on the sidelines

Terrance Copper was playing catch with someone for most of the half.  Whether it was Cassel, Bradley or Bowe, Copper was the one on the sidelines that was catching the ball much of the time he was out.

By putting him on the first team, Haley is probably pointing out some aspect of Copper's work ethic.  At this point, I think the first/second/third team designation is based off of how hard they're working.

Everyone got an opportunity

It's hard to say that not everyone got a chance on Saturday night (except Matt Gutierrez).

Players were quickly being rotated out.  Glenn Dorsey and Alfonso Boone were the starting defensive ends.  But by the third play in the series, Tyson Jackson and Alex Magee replaced them.  The majority of the players were standing on the edge of the sidelines waiting for their name to be called.

Let's just say I have a lot more respect for the reporters that cover the Chiefs every day.  This is a hard job.

Obviously, Arrowhead Pride (Yeah, that was third person) is trying to do this in ways that you haven't seen before (even if we haven't completely figured out how yet).  We're still going to rely on the Kansas City Star and BobGretz.com for much of the Chiefs coverage.

Like we've been saying, the more people talking Chiefs, the better.