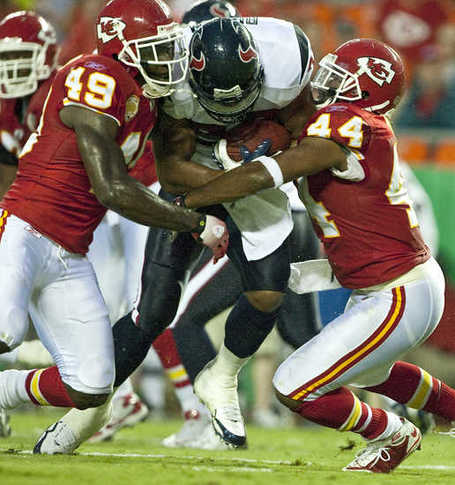 Last week at this time, we were hearing reports out of River Falls that Kansas City Chiefs safety Bernard Pollard was becoming the voice of the defense.  And by that I mean he nearly caused a mini-scuffle with the offense with that voice.  Coach Todd Haley reportedly had to tell him, on more than one occasion, to cool it with his aggressive vocals.

(Photos via David Eulitt of the Kansas City Star)

This was before he came crashing into Matt Cassel's knee in a drill that caused more than a few hearts to stop for a second (or two).

With the help of Haley, Pollard has been turning that aggression into results on the field.  In limited action, about a quarter and a half, Pollard racked up five tackles, which was good enough for the second highest total on the team.

After the jump, I've transcribed part of Pollard's Q&A session with the media following last night's 16-10 loss to the Houston Texans.  The good part about writing here is that, unlike other traditional media outlets, we don't have any space requirements so you'll hear (or read, rather) everything I heard.

How did Haley manage the ball game?

"I think Haley did a great job.  His biggest thing was telling everyone don't let us get a penalty as far as yelling at the refs.  I think everyone got their feet wet so to speak and, literally in the rain, we got our feet wet.

"The biggest thing was coming out here competing and any time we compete we want to win.  Obviously that didn't happen today but it's preseason and we're still in camp.

Did Haley make an effort with the other players to help you keep your cool?

"He did that.  He kind of called me out and told me, 'Don't get a penalty.'  So, I guess I had to kind of stop all the chatter.  Well, not stop it but kinda put it at a medium.

"But the biggest thing is that coach wants to be involved in the game. He wants to demand nothing but the best from every player on the team.  He knows with all the guys we have on this team we have to make cuts.  We gotta get to 53 before the first game.

"He's demanding all you got.  He doesn't want to sell yourself short or else you're not on this team.  He wants nothing but the best out of you and just to play ball."

"Oh man, we fly around. We play ball and we're out there competing.  We hate to give up a touchdown but at the same time just to see ourselves go out there and compete [it's good].

Going forward what needs to be corrected by next week?

"We can't give up touchdowns.  We have to be able to make a play and we have to get the ball back to our offense.  I 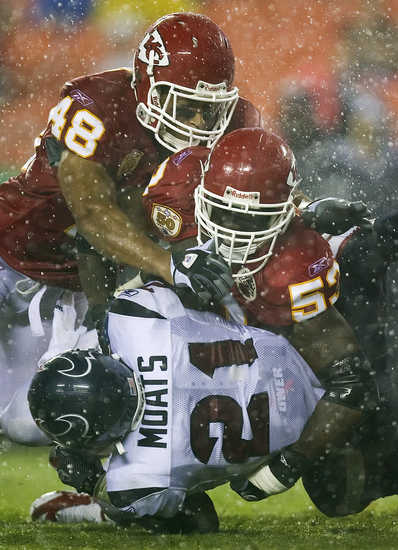 don't think we had a turnover today.  The ball was on the ground but we didn't get it back.  But that's going to come though."

You say "play harder", but I don't think you mean it like that.

"I mean play smarter and don't give up so many penalties.  We have to not think about it so much because when you think and try to play ball you play fast.  We're just going to go out there and just play ball and compete."

How are you doing back there with Mike Brown?

"I'm having fun where I'm at right now. Obviously, this is the defense I played in college so Clancy is doing things to put me closer to the line of scrimmage so I'm happy.