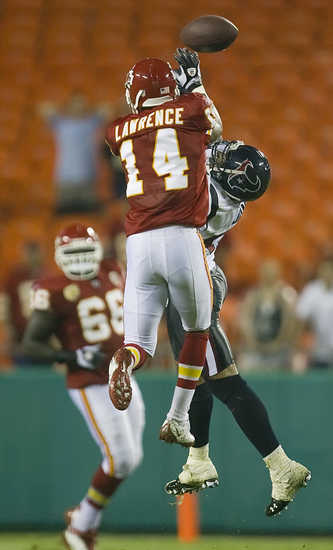 The Kansas City Chiefs certainly haven't ignored special teams in training camp.  Though there's yet to be a designated 'Special teams day' in River Falls, a handful of players have been auditioning for the return man job including Rodney Wright and Quinten Lawrence.

Neither player defined himself in Saturday's 16-10 loss to the Houston Texans.

Both first year Chiefs saw time at returner and receiver.  Wright ended with two receptions for 34 yards, which included a 22 yard scamper in the fourth quarter.  He also returned two kicks for nine yards and one punt for eight yards. Wright also fumbled a kickoff in the third quarter but was able to quickly pick it back up.

That doesn't mean all hope is lost though.  Lawrence said that special teams is a work in progress but not for lack of preparation.  "Everyday in practice there's a few of us getting reps as a returner so it gets easier as it goes on," the sixth round pick said after the game.

If you remember, Tyler Thigpen had a 12 yard run late in the fourth quarter that set up the Chiefs first touchdown of the game.  It was a block by Lawrence that helped spring Thigpen to the first down.

"That's one thing the coach was preaching everyday," Lawrence said.  "It's pretty much instilled in us everyday with all the receivers and all the running backs.  So, it's nothing special just doing my job."

First impressions of Lawrence?  He's definitely "on board" as far as the new regime goes.  And, he's a polite young man.  After the first "sir", I had to look over my shoulder to see if my father was around.