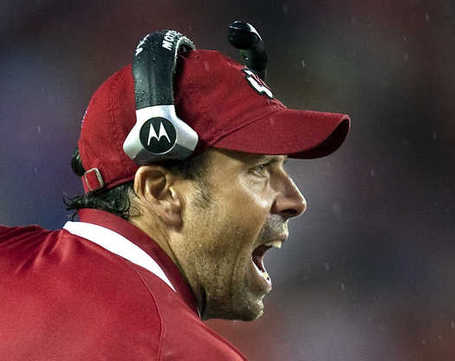 Todd Haley has a LOT of work to do. But of course we already knew that.

Offensive Line: D
The Chiefs STILL cannot run the football. The RBs are still getting hit behind the line of scrimmage and having to claw to get two or three yards. False Starts, Holding Penalties, etc. Completely unforgivable. I don't even want to talk about the unit they had on the field in the 4th quarter. Thank goodness none of those guys will ever see the field in the regular season.

Quarterbacks: C
It's hard to be too tough on Cassel because the WRs kept dropping passes. I wasn't terribly impressed with the velocity on his balls and they didn't really try any quality passing down field, just short dink and dunk routes. Cassel gets an incomplete. Croyle on the other hand was fantastic. Except for the Intentional Grounding blunder that he should have known better, he was accurate and got the ball out of his hands quick. I just had to keep reminding myself that no matter how well he plays, he cannot be a starter. Just not durable enough. Thigpen gets an A as a running back, an F as a QB. It doesn't help that he had absolutely no blocking, but he rarely ever gave plays a chance to develop before he pulled the ball down to run. When he did throw they floated and were very inaccurate. Keep him as a wildcat player, but he simply is not and never will be a pocket passer and its just a matter of time before he starts getting injured running down the field.

Running Backs: B-
Hard to grade these guys when the O-line isn't opening any holes. Savage had more success than any of them but he also fumbled.

Wide Receivers/TEs: C
WRs get a C because its the average of two groups. The "starting" receivers get an F because they couldn't catch anything. When Croyle hit Lawrence in the hip on a crossing route when he wasn't even looking for the ball, it pretty much summed it all up. The third string WRs, Bowe and Bradley get an A for no drops and making tough catches. Haley needs to find a different way of dealing with Bowe. Dropping the best receiver on the team to 3rd string just to humiliate him when everyone KNOWS he will be a starter when the regular season starts is ridiculous and will only hurt the rest of the team. How is Cassel supposed to build a rapport with him when he's shagging balls from Croyle and Thigpen?

Defensive Line: C+
The job of the offensive line in the 3-4 is to clog up the runing lanes. There were far too many gaping holes for the Texans RBs to run through. Granted the defense is playing very vanilla at this point and we shouldn't be too quick to judge. But tonight was not the performance we were hoping to see out of this unit.

Linebackers: B+
I thought the LBs did pretty well overall. DJ made several very good plays. So did Mays. Even Tamba Hali looked pretty good. The only thing keeping the LBs from an A- is that they bare some of the responsibility for the big runs that got through.

Secondary: B
The secondary is one of the strengths of the team. Overall coverage was good. They played a lot of zone, which is going to allow passes to be completed, but there wasn't much running after the catch. Once the passes were completed, the Chiefs secondary was all over them. Liked the toughness in Pollard still playing hard and laying the lumber even though he was limping badly. Is Leggett SERIOUSLY the only guy they have to play the nickel CB? I mean he did really well, but what happens if he gets hurt? I think he played every snap in the nickel tonight.

Kickoffs / FGs/ Punts: B
Succop made his FGs and extra points and had pretty good depth on his kickoffs. The punt return blocking was blowing my mind. The players were not even waiting for the ball to be kicked before they turned around and started running back to block. I kept thinking that if the Texans did a fake punt, it would go a long ways because NOBODY was watching them. Well they didn't run a fake, but when Turk botched a snap there was no one anywhere near him to put pressure on him so he just waltzed up for a first down. I sincerely hope this is something that gets ironed out before the regular season.

Coaching: D
Haley is a new coach with a new coaching staff that is still installing their scheme. They play very vanilla in the preseason, so I don't grade them on those things at all. But Haley's MO is that he's a tough guy disciplinarian. So far at least, it doesn't seem to be sinking in. Multiple botched snaps. Multiple fumbles. 8 penalties, mostly on the offensive line and mental errors. These are things that should be few and far between with a disciplinarian coach. I have no doubt that Haley will continue to punish players for making these mistakes and eventually they will come under control, but quite obviously it hasn't happened yet. Does the rain account for some of them? Sure. But the Texans didn't have as much trouble as we did.

The Chiefs are a work in progress, we all knew that. You can't judge anything by a preseason game, especially the first one. But its obvious that there are still a lot of bugs to be worked out.