What The Texans Game Should Tell Us About The Chiefs

Share All sharing options for: What The Texans Game Should Tell Us About The Chiefs 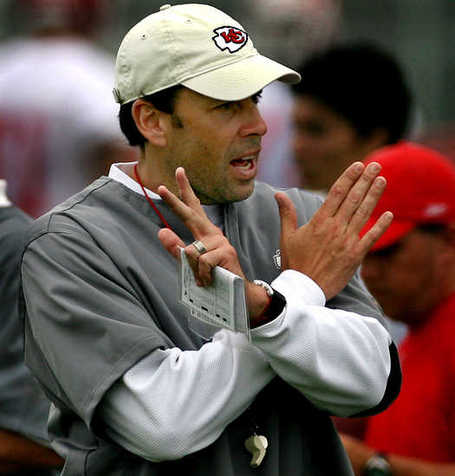 This weekend brings the first official contest of any kind for the brand new look Chiefs, bringing with it much excitement to see what exactly we have on our hands. After all, going after each other in practice among teammates is hardly the most meaningful news to come out. Tamba Hali, for example, can look wonderful against Damien MacIntosh but that's the same as saying my mother is a great cook when her competition was my father growing up.

So what exactly should we be looking for against the Texans this weekend? What should the first pre-season game tell us. Here are a few things we should be looking for:

1. Cuts on Monday - After each preseason game, the kids on the bubble will be ousted. Some might step up and prove themselves, giving the front office what they were hoping to see. But others, especially Herm's children, will be quickly shown the door so there's still time in training camp and the preseason to look at other free agents or cuts from other teams (i.e. Ashley Lelie, perhaps?). Scott Pioli has shown the ability to make decisive moves and I can't imagine he'll decide to keep 'iffy' guys around for two or even three preseason games if he already questions their ability to fit.

2. Settling Positions of Question - The right side of the offensive line. The front seven. The wide receivers. The return game. All four areas have seen new rookies and veteran additions thrown against the wall to see if they'll stick and all have seen both potential and disappointment in the early going. But game time will give us a good idea of who will begin to fit in various places. After all, competition is good to a point, but at some point, you have to start slotting guys into their expected role for the regular season to let them develop together.

For example, Matt Cassel needs to work primarily with his top receivers and if we're juggling the top spots through the entire preseason, then that means Taurus Johnson has as much chemistry with Cassel as does Dwayne Bowe. That won't happen. Same thing with the front seven. Just as Mike Goff recently discussed the importance of offensive line chemistry and continuity, the same can be said of the defensive front line. After this game, we should have a strong idea of our starting line-up and depth chart.

3. Are the gems really gems? - Rodney Wright could surprise. Corey Mays is holding his own. Taurus Johnson is catching deep passes. Londen Fryar is making plays. It's easy(er) to look strong in practice, far away from game conditions. But on the field, even in the preseason, the unearthed gems shine brighter and the counterfeits surface much quicker. So the post-weekend water cooler talk might have us buzzing about the next great Pioli find off the scrap heap... it's just a matter of which one.